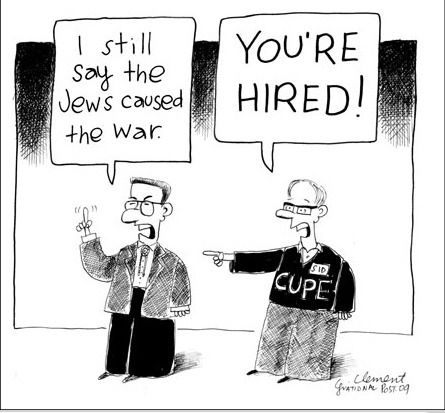 University workers within CUPE, the Canadian Union of Public Employees, have passed a motion calling for an academic boycott of Israel. Union members from at least one Toronto university plan to pressure their school to slice any financial ties with the Jewish state. The committee representing  the union’s university workers call on the union to create an education campaign on what proponents claim is Israel’s apartheid practices against Palestine.

CUPE president Sid Ryan said ” we want to do what we can in a peaceful way to end the occupation of Palestine”.  He would also like to investigate ties between Canadian universities and Israel. Jewish groups and some of CUPE’s own unions oppose the motion. “ Here we have a situation where a once proud nation has sunk so low as to have a small group put forward a motion that is, on it’s face, bigoted, discriminatory and anti-Jewish” said chief executive officer of the Canadian Jewish Congress, Bernie Farber.

Ryan’s latest statement and overall sentiment sound eerily familiar; much akin to the anti-Semitic sentiment and rhetoric that have so frequently appeared in essay and op-ed form on the Canadian Islamic Congress website. Note also, the union support given to such groups. Colonialization, apartheid, ethnic cleansing, persecution, the Zionist regime and genocide are all phrases popular with one of Canada’s most prominent Islamist propaganda machines; the CIC. Is this culture collusion? and if so, what’s in it for Sid? Perverted notoriety? or could the shared sentiment and solidarity be fuelled by the atrophied Troubles that may have followed him from the old sod just as failure, intolerance and bigotry have followed and shaped the radical Islam? This alliance may prove to be a sympathetic match made in heaven, with soul mates content in a common legitimization of bigotry fuelled by untold ignorance, arrogance and marked error.

CUPE has no business in Jew hating and anti-Semitism it is not an industry by which it should be affiliating or defining itself. Besides, it is well dominated by Islamist groups flourishing in this nation without the need of further assistance. Mr. Ryan also has no business collecting dues from a union populace whose majority wish to distance themselves from such hatefulness. Universities are places of higher learning  and should not be pimped out as platforms for Islamic radicals, Arab thugs and leftist goons to peddle their extremism. CUPE’s motion is a disgrace not an act of solidarity.