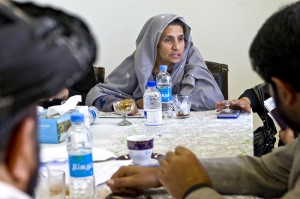 KANDAHAR, AFGHANISTAN — In the hour before her killers pulled up beside the rickshaw and shot her at close range, Sitara Achakzai turned to a female politician riding beside her with a strange look.

“I’m not afraid of death,” said Ms. Achakzai, a well-known women’s rights advocate and one of three elected women sitting on Kandahar’s provincial council. “I can go and get killed and it’s no big deal.”

Ms. Achakzai’s friend, a provincial councillor who narrowly escaped death in a bombing at council headquarters less than two weeks ago, was so stunned by the comment, made just before the rickshaw pulled up to her stop, she got out without asking what prompted the revelation. Not long after, news came yesterday that she would never have another chance.

Ms. Achakzai, a dual Afghan and German citizen who returned to help rebuild her country in 2004, was shot at close range by gunmen on motorbikes before her rickshaw could finish the slow crawl back to her home. END_OF_DOCUMENT_TOKEN_TO_BE_REPLACED