1. An original translation from Berliner Zeitung B.Z.:
After Burning Stars of David:
This is how Great the Hatred for Israel is in Berlin

December 12., 2017
Since Donald Trump’s decision to move the US embassy to Jerusalem, the atmosphere among Muslims is seething. They burnt Israel flags in Berlin. Just how big is the hatred?

At a hate-demonstration at Brandenburg Gate, Israel flags were burnt. B.Z. talked to young Muslims in the problem district Neukölln [Berlin – translator]. What is their opinion on Israel and Trump’s decision to recognize Jerusalem as its capital?

Disturbing: After just a few minutes, several young men positioned themselves against Israel.
B.Z. think it is important to document their statements so that politicians will react to this. 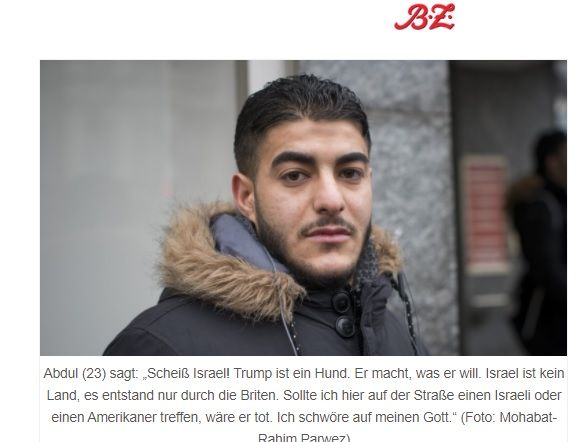 Abdul (23) says: „F*** Israel! Trump is a dog. He does as he pleases. Israel is not a country, it came into being only by the Brits. If I encounter an Israeli or an American here in the street, they would be dead. I swear by my god.“ (Photo: Mohabat-Rahim Parwez)

Mamonn (30): „Trump has no right to speak about Palestine and Jerusalem. It’s not his country. Jerusalem is not the capital of Israel. It is the old problem: Who has got the right for the land? Israel or Palestine? I attended the recent protest. Israel came and took the land from Palestine. I did not see the burning flags in Berlin, but that is not proper.“

Abdullah (31): „Israel does not exist for me. I think that the US congress and the White House know that Trump is evil. I attended the recent protests in Berlin. We have only this way, only our hope. I am opposed to burning flags. The Israelis are like us. But they divide the Palestinians.“

Hakan (19): „Israel is not a country in its own rights, they occupied the land of the Palestinians. I don’t condone setting flags on fire. But somehow one should take a stance against what’s happening in the region. Trump’s idea to move the embassy is moronic.“

2. The following videos are taken between December 8 and December 12 at different locations in Berlin: Brandenburg Gate, Hauptbahnhof, and on the streets of the districts of Mitte and Neukölln.
Thank you Martin for the videos!