As a supplement to the videos posted earlier today, two original translations with slightly differing details. 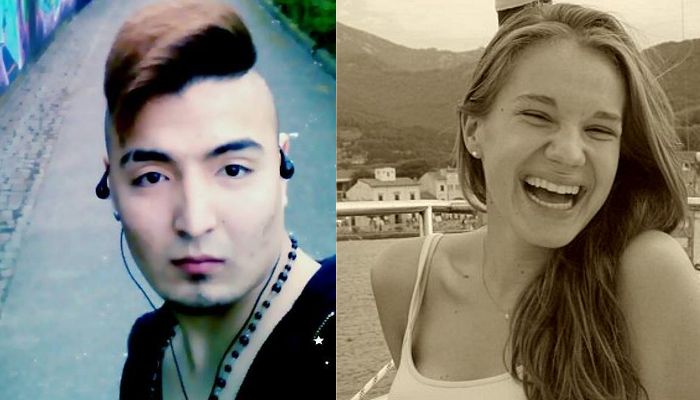 The Confession
A long second day in the case of the murder of Maria L. brings several bombshells. First, the defendant Hussein K. made a comprehensive confession. He admitted to killing and then raping the studet Maria L. in the early nmorning hours of October 16, 2016, around 3 AM on the bike trail at the river Dreisam behind the SC stadion. This was his depiction. He placed the lifeless victim only a meter from the shore into the river, to wash away the blood that had dropped on her. Hussein K. said that he had injured himself on the thorns of a black berry bush. Previously, he had stopped Maria L. with a kick against her bicycle. The student was on her way home from a party.

Hussein K. said that he had strangled his victim, who was screaming loudly, to death with his scarf. He had abused her after she had died. As a matter of fact, according to the forensic findings, Maria drowned in the Dreisam. The victim’s body had several bite wounds.
Trial observers note that the confession of the defendant does not unequivocally contain characteristics of murder [as defined in German law – translator]. Thus, at least in theory, a sentence for manslaughter might come into question.

The First Witness
The first witness to testify is the detective chief inspector who was presiding the investigations as the criminal investigation department’s main case handler. The investigators were able to reconstruct with witness testimonies how the defendant had spent the day and the evening before the deed. First, he had been drinking and smoking hashish with friends in the Seepark. According to the investigators, the friends cannot confirm that Hussein K. was under the influnece as strongly as he had said. The group of young men then later parted ways downtown.

The alleged attempt at Prostitution
Hussein K., the witness reports, thereupon went to the homosexual venue “Sonderbar”. There, he offered sexual services for money to a guest – who declined. He allegedly also harassed two women in the bar.

Did Hussein K. rape a 12-year old when he was 14?
The investigator pointed to the testimony of a fellow inmate of Hussein K. This inmate testified that the defendant had told him about the crime in Greece, where he threw a young woman down a quai wall. And Hussein K. allegedly also told him that when he was 14, he had raped a 12-year old girl in Iran. The case never went on records, as the families arrived at an arrangement. Hussein K. was beaten – by his own father. Apparently, the prosecution inivestigated into this case. It seems that there is another testimony on this, but according to BZ information no official confirmation.

The Question of Age
The age of Hussein K. remains open. He gave different answers to two friends who kept inquiring. He told one that he was 27. To the other one he said that he was 24. He also told authorities in Greece and in Germany completely different dates of birth.
There will be age expertises presented in the course of the trial. One will be based upon the examination of a canine of Hussein K. The defendant had been keeping this tooth in his room, where the investigators found it at the search of the house. 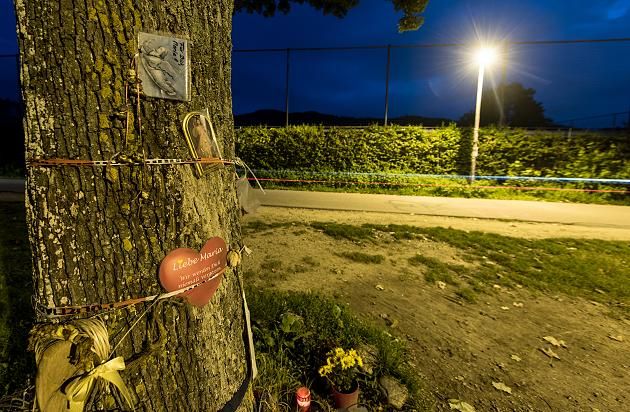 An improvised memorial at the scene of the crime

09.05 AM: Punctually at nine, the defendant Hussein K. enters the hall in the district court Freiburg. He knows the frenzy of flashing cameras from the first day of the trial. He is shackled on hands and feet today, too.

09:19 AM: The defendant reads a prepared note: “I ask you for forgiveness. I want to apologize to the family of Maria. I wish I could make it undone. I am sorry from the bottom of my heart about what I have done”. He says that he dreams about it every day. He speaks quietly, but is alert. After he has finished reading, he wipes tears from his face. Maria’s parents do not attend the second day of the trial either.

09:44 AM: Hussein K. details the night of the crime. He were drinking and smoking hashish with three friends. Then he got kicked out of a bar because he was so drunk. At some point, he walked home. At the river Dreisam, the girl approacched him on the bike. He kicked the bike, so she fell. Maria screamed, he pressed her mouth close. Then, he strangled her with her scarf, and laid her in the water, unconsciously. “When I saw how pretty she was, I wanted sex with her.”

But in his own account, he was too drunk to have an erection. Therefore, he inserted his hand. As he had injured himself previously at a bike accident, he dragged her into the river, to wash his blood from her body. Then, he fled. After his account, he cries, the judge orders a break.

10:30 AM: Judge Schenk inquires: How did you feel the days before the deed? Hussein K. says that he attempted suicide seven days before the deed. Allegedly, he too, 15 sleeping pills and a juice. A psychiatrist allegedly prescribed him both. The judge tries to reconstruct the evening before the deed. To many questions, Hussein K. replies that he didn’t know anymore. He avoids eye contact, keeps his head lowered. He could not remember where he boarded the street tram after the deed. “If I tell you that there are video recordings of you at Bertholdsbrunnen, can you remember then?”, the judge asks. But this question does not help either.

11.56 Uhr: Hussein K. is still in the witness stand. He speaks quietly, and assures the judge upon her requests that he cannot remember anything. The judges want to fill in blanks, that Hussein accounted for vaguely or left out in his testimony. Often, his answer is: “I don’t know.” The judge inquires about a “Chinese” whom he allgedly met that night. A witness is reported to have said that the defendant told him that he wanted to rape her, too. But Hussein K. denies that.

The suspect allegedly harassed other women
12:23 PM: It is the prosecutor’s term to question the defendant. The central question is: did the deed happen on impulse, or with the intent to rape the woman? Chief Prosecutor Eckart Berger lists that Hussein K. did not just harass a woman in a bar, but another woman in the street tram, proven by the video recording. Furthermore, he had been staring for minutes at a woman at the ticket vending machine. To each of these questions, the defendant replies that he cannot remember.

He does not admit that he allegedly told a friend after the deed that he had killed and raped a woman. Neither does he admit that, according to testimonies by friends, he had already before the deed intended to rape a woman. Where do the biting wounds on Maria’s body come from? In his own account, Hussein K. doesn’t remember.

2:33 PM: The first referee is police officer Edgar Pfeifer. At 8:20 in the morning after the deed, police received several calls. A patrol car then found the naked body of Maria L. She was lying in the water at the riverside. In her bag, police found her ID. Thus, they learnt that the victim had been living in a student home. Interviews there revealed that Maria L. had a boyfriend. But the two separated consensually a while before the deed.

Maria L. sent her last message to a girlfriend
2:58 PM: The police officer explains that Maria L. was known as abstinent and cautious. In her pocket, the investigators found a sealed condom. It turned out that she had gotten it on the event where she had just been as a giveaway from a condom company. Data from her mobile phone shows that Maria L. sent her last Whatsapp message from there to a girlfriend: she were cycling home now.

3:27 PM: Police officer Pfeifer explains how the investigators found the trace of Hussein K.: Five hair strands were  secured in a blackberry bush at the scene of the crime. Four of them were the victim’s. The fifth was 18 centimetres long, brown, with bleached lengths. Police subsequently viewed for days video material from the night of the crime from cameras all across town.

Finally, an investigator saw a man, in a video recording from a street train line 1 bound to Littenweiler, whose hair matched the hair that was found at the scene of the crime – he wore an undercut and a pony tail. The man’s behaviour in the video recording raised suspicion, because, according to Pfeifer, he sat down next to a woman at the station Bertholdsbrunnen. She seemed visibly uncomfortable and left to find a different seat. Then, on December 2., 2016, the manhunt was successful: A female police officer from Freiburg recognized Hussein K. on the street, even though he was wearing a baseball cap and had changed his hair.

4:04 PM: Now, it is about his age: how old was Hussein K. at the time of the crime? “He did not seem like a 17-year-old to me”, says Pfeifer and points out the older appearance, and his “bearing”. His behaviour in detention, too, pointed towards K. being older. The policeman also says: in the night of the crime, Hussein K. was out and about with six men – but then he went to the “Sonderbar” – a homosexual venue in Freiburg, Piper says. The barkeeper there said that K. seemed absolutely sober to him. Hussein K. offered a male guest sex for money. But the man refused. Then, K. danced with a woman and “groped” her.

4:43 PM: In jail, Hussein K. apparently confessed to a fellow prisoner, who then later on told the police that K., according to his own words, when he was 14, raped a 12-year old from a neighboring village in Afghanistan. There were no charges laid, the two families agreed on a corporal punishment for K.

* This text appeared in Focus in slightly different form. Assuming that readers are familiar, we left out the introduction, which recaps the crime, and the last paragraph, which recaps day 1 of the trial. We then re-arranged the order for your reading convenience, as the article was originally published in form of evolving updates, with the first entry from 9:05 AM at the bottom and the closing of the day on top.

3 Replies to “Maria L. was his third victim, at least”