Saleh Abdeslam, the man arrested in Belgium on Friday in connection with the Paris attacks, also had Germany in his sights, Berlin’s Tagesspiegel newspaper reported on Tuesday.

The terrorist network that carried out the attacks was “explicitly” built to carry out other attacks in Europe, including against the Federal Republic of Germany, a high-ranking security expert told Tagesspiegel.

In fact, the Paris group may have been just one of three groups put together by Isis to carry out attacks in western Europe.

Security sources told the newspaper that most of the first group was killed in a US airstrike on Raqqa, capital of the so-called “Islamic State” in Syria.

(The only lesson the Muslims will learn from anything we do, is not to order so many pizzas at once to the same address)

Eye witness to the two explosions at Airport

3. Donald Trump proves once again that saying things which are obviously true and childishly obvious have become heretical in our new communist utopia.

SKY News struggles with the idea that it was a terrorist attack. No mention as to who or why. Cuase that would be Islamophobic

This appears to be the official press release from Islamic State press agency, Amaq

The URL is here, but not hot linked. 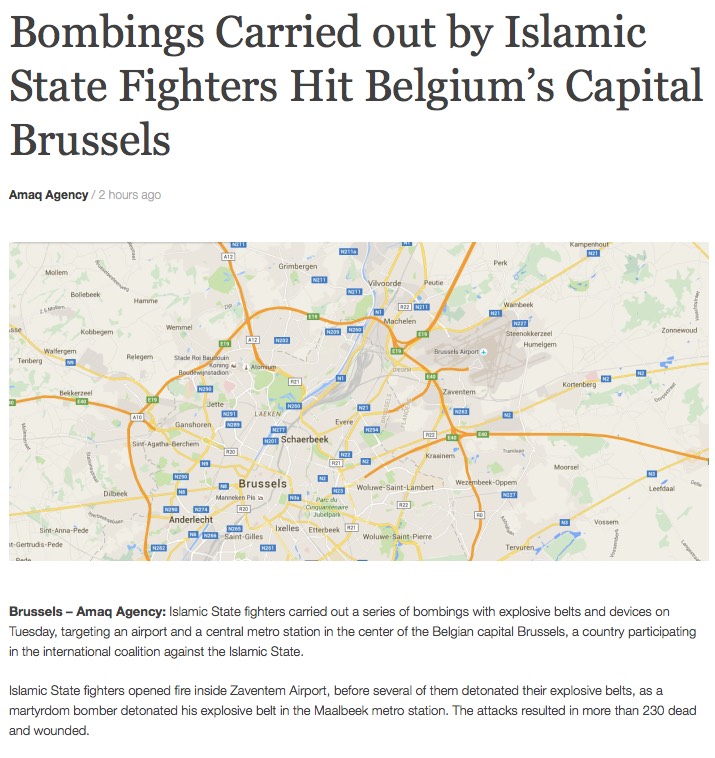 Thank you Sam, M., Wrath of Khan, Tundra Tabloids, Richard,  and more. This will be updated every few minutes as news comes in.

51 Replies to “More general misery from religious Muslims and updates on Brussels: (Ongoing with updates at bottom)”