An original article by Carpe Diem:

When Khaled Idris Bahray, a 20-year-old Muslim ‘refugee’ from Eritrea, was found stabbed to death in the courtyard of his housing estate in Dresden on January 13, it didn’t take long for the media to link the murder to the local PEGIDA movement. Now, as his 26-year-old roommate Hassan Saleh, also a Muslim refugee from Eritrea, has confessed the murder, the media have become quiet. Right after Khaled Idris Bahray had been found dead in the courtyard of his flat, the media and the left launched a massive smear campaign against PEGIDA. For them it was obvious that he must have been killed by those ‘far right Neo-Nazis’.

Some events of the last days:

“I have no understanding for the negligent approach of the investigation authorities.”

“ ’We are so afaid,’ says 26-year-old Hassan Saleh who had shared a room with Bahray. In Eritrea they had dreamed of the freedom in Germany and of safety, but since they were here, they are scared. Since they are here, there is ‘Pegida’. Khaled’s friends don’t understand what exactly these rallies mean, but they feel: They are not welcome here.”

“ ’If we live here or some streets away,’ says Hassan Saleh, one of the flatmates and closest friends of the dead, ‘that doesn’t make a difference. Dresden is Dresden. We all just want to get away from here, no matter where, just out of this city.’ […] “

“On the brutal killing of Khaled Idris Bahray” 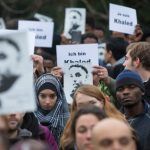 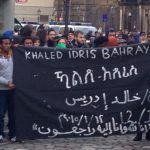 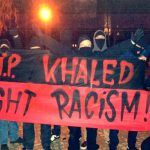 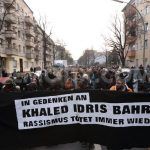 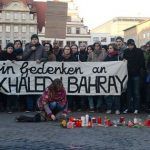 Now things have become pretty quiet, since the left and Muslims can’t get any political gain out of the killing anymore. Khaled Idris Bahray will be buried on a Muslim cemetery in Berlin now, as the Christian cemeteries in Dresden were obviously not good enough. No-one will ask why he didn’t go back to Eritrea when the Eritrean–Ethiopian War had ended in June 2000, or why he didn’t stay in Islamic Sudan, where he had lived until 2014. Nobody cares why he didn’t stay in Lybia, another Muslim country he came through during his ‘flight’. And when he arrived in Sicily, why didn’t Italy seem safe enough to him. Why did he have – according to his autopsy – ‘substantial traces of drugs’ in his blood?

These are questions the media will not ask. Instead they wait for their next chance to smear PEGIDA.

Thanks for many English sources to: The Muslim Issue

2 Replies to “Germany: The Political Exploitation of a Murder”