(Now this would make an unusually disturbing episode of the British TV show, ‘Misfits’) 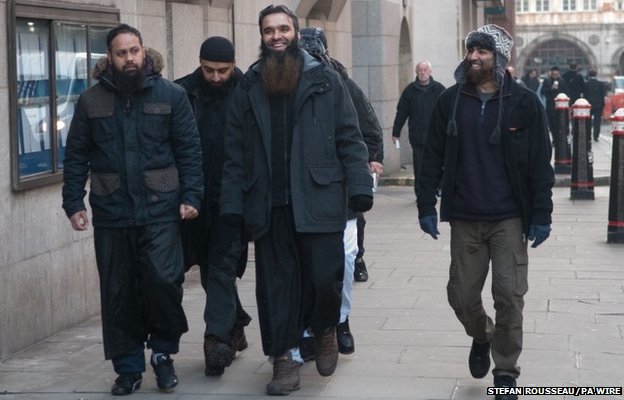 The men were convicted of public order offences after events in central London that promoted extreme versions of Islam, one of which culminated in members of the public being attacked, police said.

A group of Muslim men have been given three-year anti-social behaviour orders (Asbo) for threatening violence […] Horner is already subject to a five-year Asbo for spreading extremist religious views during vigilante patrols in east London that called for a Shari(a) State in the UK.

(Wow! And you go to jail for months or longer for laying a piece of bacon on a mosque doorknob!)

2. The Germans in the PEGIDA marches in Dresden often chant: “Lying Press”. Wanna know why? Read this. It isn’t just lies or even a smear job. Its a story that should be about the new leader of a movement that has tens of thousands of people marching in freezing cold streets in Germany every week and not once does it ask why. Instead, the focus is on a Youtube video of some woman mocking the new leader. Basically it is another attempt at destroying a good woman like SNL did to Sarah Palin by thrusting forth a mocking mannequin like Tina Fey. Let us Hope Tina never has a good night’s sleep again for her role in what has happened to America since.

3. I wonder if any country heavily influenced by islamic thought might have a law forbidding talking to Israelis in a casual way for its citizens?

4. Krauthammer on the Israeli PM speaking to congress in the US

5. Ugandan muslim beats daughter to death for converting to Christianity

A former Miss Turkey is facing trial for posting a satirical poem on social media that criticised her country’s president.

The arrest of Merve Buyuksarac, 26, follows a crackdown in the country on critical media in the wake of the Charlie Hebdo shootings in Paris.

Armed Turkish police last week stopped delivery lorries leaving a newspaper’s offices to make sure that they had not included section of the French satirical magazine that might be offensive to Muslims.

Although officially Turkey is secular, 99.8 per cent of the population are registered as Muslim and there has been heated debate over freedom of expression in the wake of the Paris massacres.