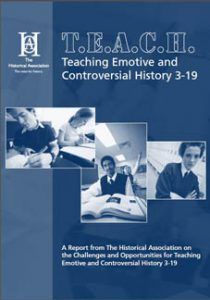 Here are a few choice excerpts from a DoE paper “Teaching Emotive and Controversial History 3-19” https://www.education.gov.uk/publications/eOrderingDownload/RW100.pdf

“For example, a history department in a northern city recently avoided selecting the Holocaust as a topic for GCSE coursework for fear of confronting anti-Semitic sentiment and Holocaust denial among some Muslim pupils.”

“In another history department, the Holocaust was taught despite anti-Semitic sentiment among some pupils, but the same department deliberately avoided teaching the Crusades at Key Stage 3 because their balanced treatment of the topic would have directly challenged what was taught in some local mosques.”

bringing this to you via David A Levy…

So finally after years of rumour and denial of rumours Britain’s Department for Education and Skills and The Historical Association have finally admitted in a report (https://www.education.gov.uk/publications/eOrderingDownload/RW100.pdf) that many schools have decided to not include the Holocaust in history lessons as it offends some Muslims.

Why? What’s so offensive about the holocaust to Muslims?

The report mentions that an educator from northern England stated that there “was a fear of confronting anti-Semitic sentiment and Holocaust denial among some Muslim pupils.”

Those educators have my sympathies, we confront anti-Semitic sentiment and Holocaust denial on this groups page almost daily, however I don’t believe that that’s in itself a reason not to teach the truth about the holocaust and personally I believe that there is another reason why Muslims don’t want to learn about the holocaust as wellIslamists have spent the last 40 years and more building up the facade that they are the victims, the victims of the the crusades, the victims of Zionism, the victim of the UN, the victims of their own leaders corruption etc etc etc .Islamists have become professional victims, whether its spousal murder or bombing a school bus or flying a plane into a building islamists always claim that they did so because they are the victim of some crime- to me it appears that they are professional victims seeking an excuse to justify the violence that is so inherent in and to their ideology.

They CANNOT allow any other group, especially Jews, to in any way be seen as the victims in any incident, I suppose that’s why I’ve NEVER EVER ONCE EVER heard an Muslim admit that Jews were persecuted, humiliated and subjected to horrific treatment under Islamic rule despite such treatment having been documented in detail.

I believe that that is the entire problem. Muslims are oblivious to the 1400 years or mayhem and destruction that they have caused in their quest for conquest in the name of Allah. Until they lift this veil from the narrative that they are being taught no substantive change towards peace will be made in the 20 odd conflict areas around the world that involve Muslims

9 Replies to “School History being re-written in the UK.”