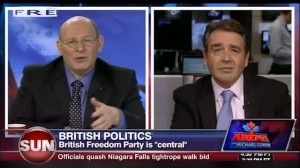 Last month Britain’s Independent newspaper reported that the controversial English Defence League movement, which campaigns against radical Islam, had signed a “pact” with the relatively new British Freedom Party. The Independent’s headline suggested that, through the alliance, the EDL was preparing to “storm local elections.” According to the article in the Independent, “The English Defence League plans to field candidates for the first time in local elections after an alliance is finalised between the far-right group and the British Freedom Party, which was set up by disgruntled members of the British National Party.”

Being associated with the EDL street protest movement has helped propel British Freedom into the spotlight. Several, largely critical, reports have been published by smaller British media outlets in the last day or two, and the party’s chairman, Paul Weston, was also recently interviewed on the Canadian Sun TV’s Michael Coren Show.

However, this may not be the only association. British Freedom’s name hints at the loose alliance of “freedom” parties in Europe, whose spiritual head is Dutch MP Geert Wilders.

Mr. Weston, a former member of the anti-EU United Kingdom Independence Party (UKIP), describes himself as a “classical liberal.” I wanted to ask him about these associations and alliances, and to find out how he sees British Freedom. My interview with Mr. Weston, which took place on December 10, is reproduced below.

ES: Congratulations on being on [Canada’s] Sun TV. That’s a pretty big achievement for such a new party. How do you feel the British Freedom Party is coming along?

PW: We’re getting our name out into the mainstream media. We had a piece in The Independent on us. It wasn’t very friendly of course, but it still gets your name out there. People are gradually starting to hear about us, so it’s not bad.

ES: And you’re getting quite a few people joining, I gather.

ES: I guess one complaint might be that there are just a lot of these parties out there. So, how is British Freedom different from say UKIP, the Conservatives, the BNP, etc.?

PS: Well, let’s start with the BNP. The BNP are still ethno-nationalists. The world has moved on. I don’t think they’re going to get anywhere with that sort of attitude. England, Britain is as it is; you are never going to turn it back to 1950. You can of course say ‘alright, we are going to be a multiracial country but we don’t have to be a multi-cultural country.’ And, of course you can’t have both of those; that’s a recipe for a disaster. Multiracial and British culture; that can work. So that’s the difference between us and the BNP.

The Conservatives obviously will not talk about Islam in particular. But they have said they are going to cut immigration back to the tens of thousands. That clearly isn’t the case. So, they are not going to be able to do very much about saving this country over the next few decades.

UKIP I think are good, and we are essentially UKIP but we will talk about Islam. But Mr. Farage has actually come out and said that he will not say anything about Islam because he will no longer be invited on to BBC television programs such Have I Got News for You. I think it’s terrible, so that’s really why I left UKIP.

ES: And when did he say that? Did he say it publicly?

ES: On Sun TV you mentioned that people of any ethnicity can join if they love British culture, but I can just hear the “anti-fascists” going wild at that, saying that British culture is so oppressive, and evil, and fascist, and racist, and that this is just a thinly disguised racism. So what would be some things that ethnic minorities, and religious minorities even, might appreciate in British culture?”

ES: So, is it the freedom that they appreciated?

PW: “Well, it certainly should be. We are of course a proper, tolerant, democracy. As I said on the Michael Coren Show, we were – perhaps we are not any more – but we were renowned around the world for our civilized, free, democratic society.

ES: So, what are British Freedom’s main issues?

PW: We want to counteract the spread of fundamentalist Islam. We want to stop immigration for a period of years. We want to repair the damage done to the education system. Tackle crime. And we want to promote British values and culture, and introduce a US style first amendment guaranteeing Free Speech.

ES: And that would be a total stop?

And, after that, of course, you can have a civilized immigration system. [Which would mean] if you are coming from somewhere like India or Pakistan, then you have to be able to speak English, you have to be able to prove that you have a job waiting for you; you can’t just come in here and speak no English and expect to live on welfare. So, [our plan would be] good for us, and good for people who genuinely want to come here for the right reasons.

ES: What is British Freedom’s vision of a future Britain? Because obviously there’s a lot of problems in Britain at the moment, everything from out of control immigration to radical Islam to binge drinking among pretty young people.

PW: It’s a mark of the march through the institutions. If you abolish religion, and you adopt cultural relativism where there’s no right or wrong, and you get rid of the taboos, what you end up with is what you see on a Friday and Saturday night in all of our towns.

My long-term view is to, as much as we possibly can, assimilate Islam into British society. The ones that simply refuse to be assimilated will have the choice of leaving. No one is going to force them to leave, but we will make it quite obvious that if you really refuse to adapt to our society the state will not provide all of the amenities that you seek.

ES: Because at the moment you have a lot of very extreme and radical Muslims on welfare, and I guess you would put a stop to that?

PW: Yes, and one thing that would immediately have to go is this crazy idea of paying welfare to three or four Muslim wives. Providing they were married in an Islamic country they can come here and live on welfare. These things have to be stopped. And, that of course will slowly make a difference in how many people want to come here and stay here. You can’t have sharia courts here; we have our law. If you don’t like our law [then] go somewhere else.

ES: What is your background? You were a UKIP member and you ran for UKIP a couple of times.

PW: Just once. I joined because of Lord Pearson, who was the only person to speak about Islam. So, [after that] it was either start a new party myself, or give up totally.

ES: And, how would you describe your personal politics?

I didn’t vote for Mr. Barroso [the EU President], and I certainly can’t vote him out, and these people seem to pass 70 to 80 percent of the laws in my country. So clearly one cannot remain a classical liberal, but that is how I view myself.

ES: There’s been a lot of stories coming out of Britain where the police have simply refused to prosecute cases where Muslim extremists have been the perpetrators of, frankly, some very serious crimes. And, some of the victims have been women; some have been gay people; and some have even been Muslim people. What would British Freedom do to address that?

PW: It is quite extraordinary the levels the police have stooped to in this country… we [also] had the girls being groomed up in the northern towns. The policeman involved in this he admitted that they did not do very much about it because they feared they would be accused of racism as a result. It really is quite simple. If people break the law, then the police prosecute them or they investigate them. The idea that some people have a get out of jail free card because their skin or religion is the correct color or ideology has simply has no place in our country. It’s quite unbelievable.

ES: So, British Freedom stands for equality before the law?

ES: One of the other issues is the EDL. What is the relationship between the EDL and British Freedom?

PW: British freedom supports the principals of the EDL – and that’s it from our side. From their side, they’ve said ‘look, this is a political party that will talk about Islam, so if you do vote, do so [for British Freedom].’ It’s a symbiotic relationship, but there’s no alliance or pact or anything that’s been signed. It’s just a gentlemen’s agreement that we will tacitly, quietly, support each other.

ES: The name implies that British Freedom ties in with Geert Wilders’s Europe-wide Freedom alliance. Have you had any contact with Wilders at all?

PW: I’ve met him several times. I was supposed to meet him the first time when he was turned back at Heathrow. I met him the second time, when he did manage to make it to the House of Lords. I bump into him [in Europe] sometimes, and I saw him at the launch of Die Freiheit in Berlin.

ES: And, what is the connection between British Freedom and the other Freedom parties in Europe? Is it just an idea?

PW: I think it was supposed to be more concrete. Die Freiheit is of course the German Freedom Part. Geert Wilders is involved with that, and supports it. He is aware that we are now going, and he’s aware that I am running it.

ES: Where do you see British Freedom going in the next the couple of years?

PW: The most important thing is to get ourselves out there into the public eye. I think if we can do that I think we have a very good chance of growing remarkably quickly.

3 Replies to “Paul Weston: Britain now has a different kind of political party”