Women who do not wear headscarves are being threatened with violence and even death by Islamic extremists intent on imposing sharia law on parts of Britain, it was claimed today.

Other targets of the ‘Talibanesque thugs’, being investigated by police in the Tower Hamlets area of London, include homosexuals. 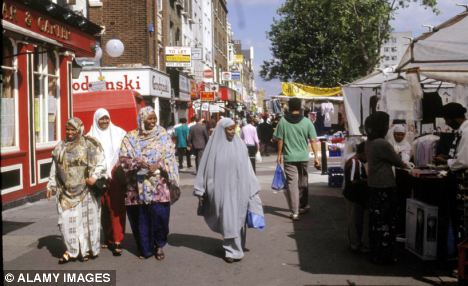 Troubled: Whitechapel in east London is at the centre of the hate campaign by the ‘London Taliban’ (file picture)

Posters for H&M which feature women in bikinis and a racy poster for a Bollywood film have been defaced.

It is believed Muslim extremists are behind a spate of attacks being investigated by police, according to the Sunday Times. 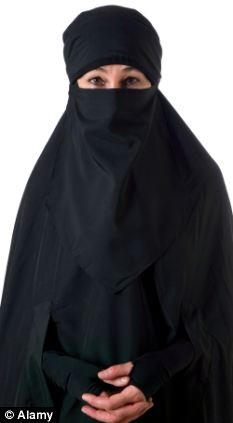 How they want to see women: ‘Talibanesque thugs’ have been threatening women including non-Muslims with violence for not wearing a headscarf

An Asian woman who works in a pharmacy in east London was told to dress more modestly and wear a veil or the shop would be boycotted.

When she went to the media to talk about the abuse she suffered, a man later entered the pharmacy and told her: ‘If you keep doing these things, we are going to kill you’.

The 31-year-old, who is not a practising Muslim, said she has since been told to take holiday by the pharmacy owners and now fears she may lose her job.

She said: ‘Why should I wear a hijab (headscarf) or burqa? I haven’t done anything wrong.’

Other incidents reported include the placing of stickers across the white-minority borough which state it is a ‘gay-free zone’ and the daubing of paint on posters for clothing shop H&M featuring women in bikinis.

Ghaffar Hussain, of the anti-extremism thin tank the Quilliam Foundation, told The Sunday Times that the intimidation was the work of ‘Talibanesque thugs’.

He added: ‘This minority think they have the right to impose their fringe interpretation of Islam on others.’

Paul Rickett from the Met Police said: ‘I am saddened that there are a small minority of people who do not wish to respect the lifestyle choices of others’.

He added that there was nothing to indicate the incidents were linked.

Three men have been charged with religiously-aggravated criminal damage in connection with some of the incidents, which have mirrored crude attempt at censorship in Birmingham.

Tower Hamlets has a reputation for being a centre of Islamic extremism in London.

Recently it was revealed Rich Dart, a middle class former BBC worker had converted to Islam and was living in Bow, east London in a £300,000 flat paid for by benefits. 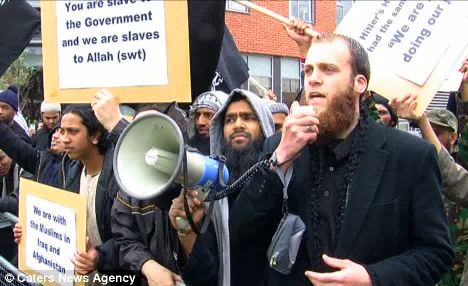 Despite being unemployed, Mr Dart regularly attends Muslim rallies in which he was recently heard to say: ‘When the Taliban defeat the allies we will establish Sharia law and take the fight to the enemy.’

Before Christmas posters appeared in the borough claiming the religious festival was ‘evil’.

The campaign’s organiser was 27-year-old Abu Rumaysah, who once called for Sharia Law in Britain at a press conference held by hate preacher leader Anjem Choudary, the leader of banned militant group Islam4UK.

Mr Rumaysah said: ‘Christmas is a lie and as Muslims it is our duty to attack it.

8 Replies to “‘Wear a headscarf or we will kill you’: How the ‘London Taliban’ is targeting women and gays in bid to impose sharia law”