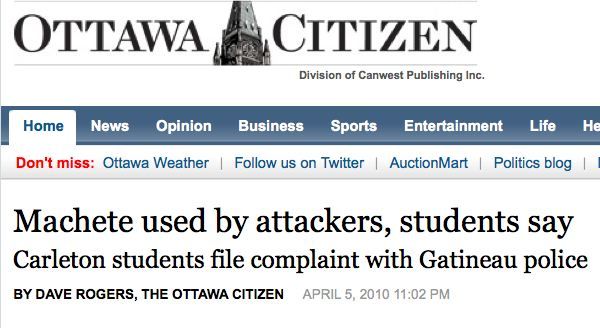 A well-known student supporter of Israel at Carleton University and an Israeli engineering student at the university say they are counting themselves lucky to have survived an attack with what they say was a machete near a Gatineau bar early Monday.

Nick Bergamini, 22, vice-president of the Carleton University Students’ Association, said he and roommate Mark Klibanov were leaving Le Volt bar on Promenade du Portage at 1:45 a.m. when a group of about 10 men began yelling in English and Arabic that they were Zionists and Jews.

“These people must have been Carleton students because I recognized one of them,” Bergamini said. “I said I love Israel because I support Israel’s right to exist.

“I told them not to do this because I knew who they were, but I got hit hard on the back of the head. We ran to the bar entrance because bar security was there.”

The two men later decided to walk across the Chaudière Bridge to Ottawa when the crowd surrounding them dispersed about five minutes later. As they walked through a parking lot near the bridge, however, a car with three men inside pulled up beside them.

“One of them rolled down the window and said: ‘I am the one who hit you, you f—–g Jew,’ although I am not a Jew,” Bergamini said. “Two guys came out of the car, and one of them tried to kick my roommate.

“One attacker said, ‘Open the trunk,’ and another guy pulled out a machete that glinted in the street lights. I yelled that they had weapons, and we started running as fast as we could. I saw the guy wind up with the machete as I looked back.”

Bergamini and Klibanov reported the attack to Gatineau police on Monday and said they planned to tell university officials about it. Gatineau police Lt. Gilbert Couture confirmed that police were investigating the attack, but provided no further details.

Klibanov, 20, said the machete missed the back of his friend’s head by about a foot as they sprinted across the bridge to Ottawa. He said they were not injured because they outran their assailants.

“I have never spoken to that guy in my life, but it is known at Carleton that I have been to Israel and that I have a Facebook site supporting Israel,” Bergamini said. “My roommate is on the board of the Israel Awareness Committee that does advocacy on behalf of Israel.

“I am happy that I am still alive. We both could have been killed (Sunday) night because he swung a machete at my neck.”

Klibanov said he recognized one man in the group, but couldn’t remember how many people were chasing him. He said somebody should be charged with the assault to prevent similar incidents in the future.

“The first thing they said before punching my friend is that we were Zionists,” Klibanov said. “This situation surprised me, but the intentions of these people did not.

“If you are from the right wing or are a supporter of Israel, it gets around pretty quickly because Carleton is one of the worst campuses for having a division between Palestinian and Jewish students. It is a really polarized campus between left and right, Jewish and Arab students.”

“The Israel and Palestine issue is one of the things that can cause people to become emotional,” MacDonald said. “Our job is to make sure that these debates can happen without anyone’s personal safety being threatened.

“We have met with student groups on both sides of such issues and told them that we are not here to tell them what to think, but certain kinds of behaviour are not acceptable.”

Len Rudner, director of the Ontario chapter of the Canadian Jewish Congress, said being a Jew or Zionist in Canada should not prompt such an attack.

“Maybe we should consider the impact that words can have in accelerating the argument to the point where people feel that this kind of behaviour is acceptable,” Rudner said.

“If you permit a constant invective and demonization of the Jewish state and people who support the Jewish state, some people will feel that this gives them the permission or responsibility to carry out this kind of attack.”

6 Replies to “Ottawa Citizen on the Ottawa Machette attack”