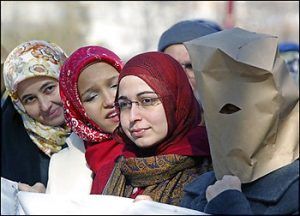 MAILONLINE… An MP was investigated by police for inciting racial hatred over controversial burkha comments following complaints from a human rights association.

Conservative MP Philip Hollobone said wearing a burkha was the religious equivalent of ‘going round with a paper bag over your head’.

During a parliamentary debate last month he urged the House of Commons to ‘seriously consider’ banning the garment.

Now it has emerged police received a complaint about the Kettering MP a few days after his comments from the Northamptonshire Rights and Equality Council (NREC).

Officers rang Mr Hollobone to say a complaint had been made but the Crown Prosecution dropped the case a few days later as there were no grounds for prosecution.

Debates in Westminster are protected by parliamentary privilege but Mr Hollobone said the complaint could have related to comments made inside or outside the Commons.

He blasted the ‘hypocritical and ‘patronising’ NREC today for championing freedom of speech while attempting to have him prosecuted.

Last month the organisation sent the outspoken MP a letter criticising his stance on Muslim women who chose to wear the burkha in public.

Mr Hollobone said: ‘It’s complete hypocrisy. They talk on one hand about freedom of speech and expression and then without even making contact try to get me prosecuted.

‘In this country you should be able to have a debate about controversial subjects without the threat of police action. That’s how democracy works.

‘I am not going to be silenced by the threat of prosecution when all I am doing is speaking out about the concerns of my constituents.

‘If this had gone to court I would have defended myself.

‘I don’t blame the police at all, they are obliged to investigate reports of crime. That’s their job. But I am disgusted that the NREC should seek an MP’s prosecution.

‘I have been in correspondence with them and offered to meet representatives of local Muslim groups but that invitation is still outstanding.

‘The issue here is the covering of ones face in public. the nihab and the burkha are not legal requirements.

‘There are large numbers if immigrant women who will not be able to integrate into the British way of life if they cover themselves up.’

On March 11 Mr Hollobone used another Commons’ debate to mark International Women’s Day to reiterate his views on the burkha.

He said: ‘This is Britain. We are not a Muslim country. Covering your face in public is strange and to many people both intimidating and offensive.’  Burkhas are worn by an estimated 100,000 of the 2.4 million Muslims in the UK.

Northamptonshire Police said the complaints related to comments made at the beginning of February in Parliament, although he also expanded on them in a local newspaper.

A police spokesman said: ‘It was brought to our attention and we looked into it but the CPS decided there was no case to answer here.’