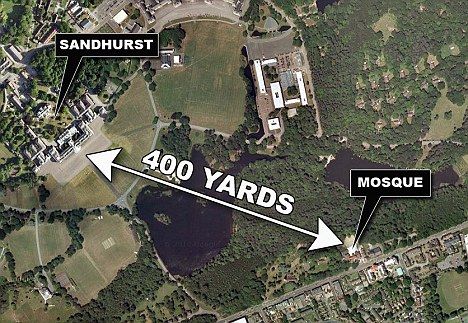 MAILONLINE… Generals are trying to block plans to build a mosque with two 100ft minarets next to Sandhurst.

The £3million building would have a clear view over the military academy and is just 400 yards from its parade ground.

Senior officers oppose the project saying it could pose a security threat to cadets.

Yesterday an Army source said: ‘This has gone right to the top of the chain of command.

‘There is very real concern that if this thing gets built then soldiers could be put at risk.

‘It is outrageous to even think that the officers of the future would have to watch their backs while they are still in training.’

Hundreds of newly-commissioned Army officers take to the parade ground each year for the academy’s passing out ceremony.

The event attracts senior members of the Royal Family, including the Queen when her grandson Prince Harry was commissioned in 2006.

The gigantic mosque is the idea of the Bengali Welfare Association, which worships at the al-Kharafi Islamic Centre in Camberley, Surrey.

The group wants to demolish a listed Victorian school building in use as a mosque at the centre and replace it with a sprawling Saudi Arabian-style building.

Planning papers reveal that the massive structure would tower over local buildings.

As well as the two minarets, it would feature a large central dome, five smaller outlying domes, a morgue, a library and a separate worship area for women.

However, a procedural error means the application now needs to go to a full council meeting for approval.

And the Ministry of Defence – which initially had no objections – has its mind to insist that the minarets are not built.

Local MEP Nigel Farage of UKIP, who is battling the plans, said: ‘I am appalled that a local council can totally ignore the wishes of the overwhelming majority of the electorate of Camberley and overturn the recommendations of planning officers.

‘This building is quite simply inappropriate and gives rise to genuine security concerns.

‘I know that senior military officers are extremely concerned about this. It simply cannot be allowed to go ahead.’

Alan Kirkland, a local campaigner, said: ‘Local people are simply flabbergasted that 100ft high minarets can be built right next to the Royal Military Academy.

‘There is obviously a security risk and there is no way that it should be built.’

A Ministry of Defence spokesman said: ‘Defence Estates has objected to the plans as such a tall building would give oversight into Defence property which could prove a security risk.’