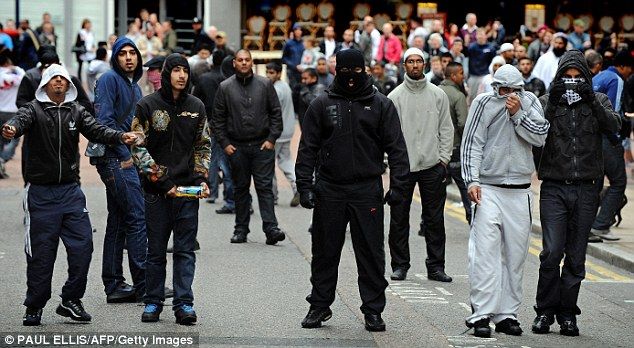 Times Online… Birmingham’s top Muslim leader urged his followers to “vent their feelings” against anti-Islamic protesters during a weekend rally that ended in violence and dozens of arrests, The Times can reveal.

Muslims were encouraged by the Birmingham Central Mosque to counter-demonstrate during Saturday’s protest in the city, which was organised by the right-wing English Defence League (EDL). It is understood that Muslims were encouraged to confront the protest against the advice given by the West Midlands Police to community leaders to stop their followers from attending.

Mohammad Naseem, Birmingham Central Mosque’s chairman, considered to be the most senior community leader in the West Midlands region, told The Times yesterday that he encouraged members of his congregation to attend the rally, at which about 80 people were arrested, to express the Islamic community’s solidarity.

Dr Naseem’s advice came less than a month after Muslims of predominantly Asian heritage clashed with the EDL in Birmingham at another antiIslamic rally that led to 35 arrests.

He said the presence of Muslims at the weekend protest was an important stand against anti-Islamic fascists. “I think it shows that the community has got a sense of cohesion,” he added.

The police used their batons to subdue the violent crowd of more than 200 people, predominantly aged between 16 and 36, who threw bottles at each other and exchanged punches.

They could not stop the clash between the two groups despite initially containing them to two separate locations in the city. It is believed that half of those arrested were counter-protesters.

The Times understands that the West Midlands police received assurances from Muslim leaders during numerous meetings in the past two weeks that their community members would be discouraged from attending the protest, which the EDL had announced at the August 8 demonstration in Birmingham.

“The police had a lot of engagement with mosques, youth workers and social workers, and a lot of work went on to encourage people to stay away and not attend,” police sources said. “But it is obviously difficult to stop kids going and their presence alone would be deemed provocative.”

Asked if it would have been a better idea to encourage Muslims not to attend the rally at all, Dr Naseem said: “The thing is, that is their right, I cannot say, ‘You don’t have this right’.”

But Dr Naseem emphasised that his followers were told not to attend the rally alone but to form allegiances with other counter-demonstrators such as socialist groups and members of other religious denominations.

He also said that Muslims were told to attend only after he was assured by police that protesters and counter-protesters would congregate at different locations.

He said: “If it was kept as originally intended, then everybody would have had a chance to give vent to their feelings without coming into contact with each other. And that I will take up with the police.”

West Midlands police stand accused of failing to manage the protest despite obtaining a Section 14 authorisation from the Home Office under the Public Order Act to arrest anyone who breached the conditions of the demonstration.

The order enabled the police to nominate the protest’s location, the maximum number of activists and the time length of the event.

But what was planned as a two-hour “stationary protest”, which could not be legally banned by the Birmingham City Council or the police, turned into a scene of chaos and disorder after the rival groups clashed.

Protesters were told to stay at Lancaster Circus while the rival rally was organised to take place at Old Square.

It is understood that small pockets made up of 20 or so protesters and counter-demonstrators began to form away from allocated areas. It wasn’t long before the rivals began feuding and police began making arrests.

Birmingham City Council last night praised the police for their “successful” management of the event.

“Birmingham City Council fully endorses [the] action taken by the West Midlands Police on Saturday and will continue to work in partnership with the police, retailers and other partners to ensure the safety of Birmingham’s residents and visitors, and continue to support the retail economy,” a spokeswoman said.

But others, including Labour MP Khalid Mahmood, were not so complimentary and accused the police of failing to prevent the clash. “Police have had four weeks to plan for this but they have failed innocent members of the public in Birmingham city centre,” Mr Mahmood said.

“It has been a complete mess in terms of policing. The force needs to look at things at the highest level.”