Tundra Tabloids seems to have the best work on this issue. When one adds up a few things that seems to be happening now in the world, the picture is certainly bleak for any western standards of evidence or attempt at objectivity in reporting. Certainly bleak if you can be identified as Jewish. It would appear that methodological thought itself is under attack in favor of political correctness and fairly primitive games of imbued significance.

‘I say this Kleenex is holy. Its the Holy Kleenex of Antioch!’ If you do not treat it as I say you must, you have committed a blaspheme and you must be punished to death.’

The instinct to ask what makes it holy and why it deserves reverence seems to be fading from the worlds cultures leaving us all with dhimmitude of one form or another, at the mercy of whoever has the raw numbers to make politicians kowtow to their irrational rules and customs. Please read the article below, taken verbatim from Tundra Tabloids: 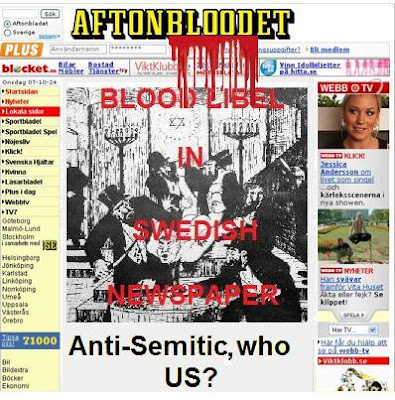 Not all Swedes are pleased with the Aftonbladet’s recent display of anti-Semitism under the guise of criticism of Israel. The Tundra Tabloids’ Swedish source for the recent information, Reinhard, says that the Swedish blogosphere, and some of the media, are busy justifiably raking the Aftonbladet over the coals for it role in proving that, as Barry Rubin puts it: “Antisemitism Is Anti-Zionism and Is Now Acceptable.”

The Swedish paper Svenska Dagbladet, in one of its own blogs, mentions a press release issued by the Swedish Embassy in Israel, that distances the government and the Swedish people from the offensive article published in the Aftonbladet:

Swedish Embassy in Israel has today sent out a press release that points out that Aftonbladet’s culture page does not speak for all Swedes. It is strange that the Swedish Government through the embassy marks its rejection and meddles in what a Swedish newspaper chooses to publish. In Sweden, as in Israel, there is freedom of expression. And given that Israel is a tolerant and open society it is difficult to imagine that the article would provoke the same type of reactions that Muhammed cartoon made in the Arab world, is why the press release is really quite unnecessary. But it is still worth reading.

On August 17 the Swedish newspaper Aftonbladet published an article about alleged organ handling in Israel. “The article in the Swedish newspaper Aftonbladet is as shocking and appalling to us Swedes, as it is to Israeli citizens. We share the dismay expressed by Israeli government representatives, media and the Israeli public. This Embassy cannot but clearly distance itself from it.

Other Swedish bloggers are working overtime to cover the story as well and offer their disgust:

According to the TT’s main source, Reinhard, “Both the MSM and the blogosphere are out opposing this. Again, the liberal/right is taking the Left to task for its anti-Semitism. Also the Dagens Nyheter, the other Swedish daily: notes that Boström (Aftonbladet journalist) has previously attacked the Israeli army with the same accusations but has never been able to prove anything. He’s the editor of the peace book, Salam: On War, Peace and Islam (Arena, 2007). So the Swedish Muslim “peace movement” lets a dedicated anti-Semite edit its anthology about the Islamic message of peace.

Mats Skogkär, who wrote the piece in Sydsvenskan, wrote in 2005 that Boström’s previous allegations were based on what relatives of killed Palestinians had told him. He admitted this in a telephone conversation with Skogkär, and agreed that it was peculiar that the Palestinians didn’t show any interest in investigating further.”

On August 18, Aftonbladet published an article by a man named Donald Boström. The editor responsible is named Åsa Linderborg. She is the newspaper’s cultural affairs’ editor.This was no random decision for her. When asked once: “What do you wish for most in life right now?” She answered: “What a simple question. What I want is a free Palestine.””]

The dubious idea in Aftonbladet Culture section the other day, where Donald Boström says that the Israeli Defense Forces, or parts thereof, murdering Palestinians to steal their organs, criticized strongly the Israeli press. Both the Haaretz and Jerusalem Post believes that Aftonbladet’s article reeks of anti-Semitism.

TINSC: In the interest of granting “equal time” we can now count on that Swedish newspaper to publish the “Danish Cartoons”. Right?

Henrik Clausen: I think it’s worth quoting the most famous anti-semite in Europe, for this:

“How, as a socialist, can you not be an anti-semite?”

Now, I have a notion that his anti-semitism actually came from a misunderstanding of banking, not comprehending how bankers (many of whom were Jewish) could grow rich without doing physical work. Identifying similarities with current leftwing extremists is an excercise left for the reader.

UPDATE: Write the Swedish embassy, let your voice be heard. Use the following template found here, courtesy of Ilya Meyer.