Here are two editorials from Full Comment at the National Post. The first, written by Robert Fulford describes how Opposing Israel has become a fashionable, institutionalized ritual founded on anti-Semitism. The second, by Johnathan Kay describes the latest violent episode in Gaza where Hamas (wacko group#1) attacks Jund Ansar Allah (‘Soldiers of the Partisans of God’, wacko group #2).

It begins, reasonably, as a response to apparently unnecessary violence by Israel. Then it moves on to accuse Israel of expanding on land the Arabs insist is theirs. Nothing wrong with criticizing that, surely. Israel, a state, deserves to be judged like any other.

Even those friendly toward Israel have often felt duty bound to point out its mistakes. In more innocent times, I imagined that intellectuals in the West paid careful attention to Israel’s faults because they expected it to set a high standard. Who would worry about the moral status of, say, Bolivia? No one except Bolivians. Jews, however, live with the injunction to be (as Isaiah quotes God) “A light unto the nations.”

But now everything has changed. Opposing Israel has become an institutionalized ritual. It’s now a movement across Europe and North America. It has its traditions, like Israel Apartheid Week, celebrated every spring in universities, often the cause of riots and an occasion to intimidate Jewish students. Vehement opposition to Israel appears to be the major interest of thousands of people all over the world. Many are Muslims, sympathizing with the Palestinians, but many are not. This week, attacks on Israel once more appeared on the agenda of the general council meeting of the United Church of Canada, a critic of Israel for generations.

What are reasonable people to think about these relentless campaigns in the universities, churches and unions?

Those involved often insist that it’s not a matter of anti-Semitism. They like to say, “I’m anti-Israel, not anti-Semitic. A different thing entirely.”

After decades of use, this declaration of innocence has ceased to be credible. In my personal observation, enemies of Israel often turn out to be anti-Semites as well. The true agenda of anti-Israel activists often is reflected in their style of propaganda, and in the exclusive attention they give to one particular country.

The style of the protests goes far beyond “criticism,” that benign noun implying civil disputes. Often, anti-Israel propaganda distributed on campuses and elsewhere borrows the style of Nazi cartoons. As Craig Offman reported in the Post, last winter students at the University of Manitoba found themselves confronted by posters near a campus bookshop depicting, among other things, a hooked-nosed Hasidic Jew with a star of David pointing a bazooka at the nose of an Arab carrying a slingshot; and an Israeli helicopter with a swastika on top, bombing a baby bottle.

Moreover, the word “apartheid,” now a favourite of the anti-Israel movement, carries intentionally vicious overtones of racism. It’s a way of setting the final terms of an issue before it can be discussed.

The most distressing quality of the attacks, however, is their singularity. They leave us with the impression that Israel deserves more censure than any other country on Earth — in fact, more than all other countries combined. Enemies of Israel may sometimes claim that they have also passed resolutions deploring genocide in Africa or dictatorship in Burma. But these views are expressed in comparative privacy. No widespread, long-running movements accompany them.

Does York University in Toronto, so dedicated to justice for Palestinians, also devote a week every year to the fate of the Falun Gong in China? Do Concordia University students in Montreal demonstrate against the mass rapes in the Congo? Does the Ontario branch of the Canadian Union of Public Employees (CUPE), which favours boycotting Israeli universities, have anything to say about Tibetan freedom? Have any of them heard of the World Uighur Congress’s defence of oppressed Muslims in the Xinjiang province of western China? And when dealing with the Gaza conflict, not one campus group anywhere (so far as I know) mounted a campaign against Hamas killings of fellow Palestinians. They also avoid mentioning the Hamas policy of using women and children as human shields.

So far as we can learn from how they act in public, these organizations appear to have a foreign policy with only one item on its agenda, the same one they would have if they were in fact motivated fundamentally by anti-Semitism.

Howard Jacobson, a British novelist and journalist, calls this phenomenon “Jew-hating pure and simple, the Jew-hating which many of us have always suspected was the only explanation for the disgust that contorts and disfigures faces when the mere word Israel crops up in conversation.”

Those who oppose Israel’s policies have a right to their opinions and their anger, however unreasonable. And those, like me, who are infuriated by the relentless and totally selective drumbeat, also have a right to our grave suspicions.

Jund Ansar Allah and the intra-Islamist showdown in Gaza

Only in a place like Gaza could Hamas find an even crazier Islamist group to fight with.

This weekend — in one of those surreal maniac-on-maniac battles in which you wish both sides would annihilate each other — Hamas forces attacked the followers of Jund Ansar Allah (Soldiers of the Partisans of God), an al-Qaeda inspired ultra-ultra-ultra militant group (not to be confused with Hamas, which gets two ultras, and Fatah, which gets only one) led by your usual creepy old bearded Ahmed Yassin/Abu Hamza Al-Masri/Omar Abdel-Rahman type — one Sheikh Abu al-Nour al-Maqdessi. (Check out this photo of him — the guy looks like a Klingon.) Their agenda is the creation of an Islamic emirate in Gaza and the total destruction of Israel (It’s a platform they share with Hamas, but they complain Hamas isn’t doing it with enough gusto.) 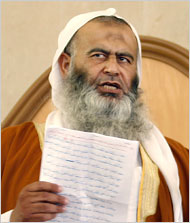 Al-Maqdessi has now gone to his virgins: His house was blown up by Hamas security forces — this being after more than a dozen of al-Maqdessi’s followers were gunned down at their mosque in Rafah. (What’s that you ask? Doesn’t blowing up the man’s family home count as “collective punishment”? Oh, and apparently, one of the dead included an 11-year-old girl. So can we expect an investigation from the UN and all the other usual-suspect NGOs who launch 18 different inquiries every time Israel confronts Palestinian terrorists? Ha ha ha.)

This counts as good news … I guess: After all, a fire-and-brimstone Islamist would-be terrorist leader has been removed from the earth. Then again, it feels weird to be cheering on Hamas in any context. I also note that in the firefight at the mosque, the KIA list included a senior Hamas leader who’d masterminded abductions of Israelis — which counts as good news, too. So one is left with the lingering feeling that — rather than getting wiped out so quickly — the Soldiers of the Partisans of God might have done the world more good by doing some more soldiering and taking out a few more Hamas terrorists.

But putting aside the crazy-versus-crazier surrealism of the whole episode, there’s an important geopolitical lesson here. And it’s this: For all the Muslims out there who say they want a “pure” Islamic state governed by Shariah law, such a project is impossible — and not just because the Koran is a religious document, not a blueprint for a modern, bureaucratic state. The basic problem faced by folks such as Hamas, the Taliban, and Iran’s Mullahs is that their claim to political power is based not on the promise of sound governance, but on their fealty to the abstract idea of God’s will — which means they’re vulnerable to every two-bit al-Maqdessi-style maniac who claims he’s got an even better, purer, less corrupt line on what God really wants.

But of course, the incumbent Islamists aren’t going to be content to settle their differences with such principled grass-roots dissidents by reasoned theological debate — and so they respond the way Stalin did when communists engaged in similarly divisive arguments about the needs of the workers: They slaughter everyone who disagrees with them. Thus the death of al-Maqdessi. Thus the uncounted Iranian protestors tortured to death in Tehran’s jails. Thus the murderous intra-Talbanic infighting in Pakistan.

In other words, the political slogan that “Islam is the answer” is not only terrifying, but demonstrably wrong: A government that pledges itself to the implementation of Allah’s wishes will always either collapse or, under siege from more-pious-than-thou competitors, decay into just another violent Iranian-style thugocracy.