A headline like this when the civilized world was still unaware of the daily horror and barbarity which is Islam would have made tongues wag and TV stations pour forth harsh questions for weeks. Now, it’s barely a headline in one of the very few media venues that bother with this sort of thing at all. Of course, had it been a non Muslim, say a white Christian well, that’s news. I suppose in a way white Christians should be flattered that the default position for them is to such a near ‘majestically’ higher standard. Or perhaps the Muslim world should riot because the worlds media holds them to such a preternaturally low one. Of course they will not. Pedophilia, rape, forced ‘marriage’ and so on are orthodoxy in Islam. It is just copying the behavior and teachings of their perfect man, Mohamed. 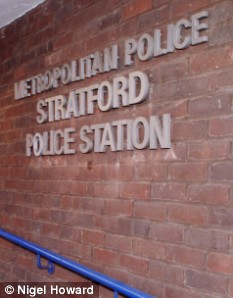 Specialist child abuse detectives at Stratford in East London have launched an investigation
Police are hunting a suspected illegal immigrant accused of raping a 15-year-old schoolgirl who had been forced to marry him.

The Bangladeshi, in his 40s, is also wanted over claims that he sexually assaulted the girl’s 12-year-old sister.

He disappeared after the elder girl, now aged 17, contacted the Metropolitan Police on June 26 because she feared she was now being forced into a second marriage.

Specialist child abuse detectives based at Stratford were told that the girl, from an Asian family living in Bethnal Green in London’s East End, had been the subject of a forced marriage in April 2007 when she was 15.

Officers have arrested a 53-year-old woman, believed to be another family member, on suspicion of aiding and abetting rape and actual bodily harm. The arrest for assault is linked to an attack on a six-year-old boy.

A Metropolitan Police spokesman said: ‘The sham marriage took place at an address in the E2 area. She alleged she was subsequently raped by the man.

‘Further inquiries revealed a second girl, then aged 12, had also been sexually assaulted by the man.

‘A 53-year-old woman was arrested on July 7 on suspicion of aiding and abetting rape and actual bodily harm.

‘She has subsequently been bailed to return on September 1 to an East London police station pending further enquiries.

‘The male suspect remains outstanding and extensive police inquiries continue to trace him.’