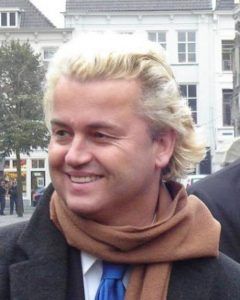 Exit polls showed late on Thursday that Mr Wilders’ Freedom Party (PVV) was on course of winning just over 15% of votes in the Netherlands.

They say Geert Wilders’ Freedom party will win four of the 25 Dutch seats in the parliament, just one behind the country’s Christian Democrats.

Dutch and British voters were the first to go to the polls to elect the EU’s most powerful legislative body.

Some 375 million people in 27 member states are eligible to vote. Most will cast their ballots over the weekend.

Voters are deciding who is elected to the 736 seats up for grabs under various forms of proportional representation.

Polls closed in the Netherlands at 1900 GMT and in Britain at 2100 GMT on Thursday.

Observers will be watching to see if turnout is higher than in 2004, when only 45% exercised their right to vote.

In the UK, elections were also held in some areas for local councils.

The results of both polls are keenly awaited to see how they might affect the national political scene, following weeks of turmoil over MPs’ expenses claims.

The vote is seen as a crucial test for the governing Labour Party, with a general election due within a year. Three senior ministers resigned earlier this week.

Irish voters go to the polls on Friday. Latvia, Cyprus, Malta and Slovakia vote on Saturday, while the Czech Republic and Italy vote over Friday and Saturday, and Saturday and Sunday respectively. People in the remaining 18 member states will vote on Sunday.

Exit polls showed late on Thursday that Mr Wilders’ Freedom Party (PVV) was on course of winning just over 15% of votes in the Netherlands.

If confirmed, the result is second only to Dutch Prime Minister Jan Peter Balkenende’s Christian Democrats (CDA), which dropped alsmost 5% to just under 20% of the vote.

The polls showed that the party’s governing coalition partner, the PvdA, was the biggest loser – down nearly 10% to about 14% of the Dutch vote.

“We dare to talk about sensitive subjects like Islamisation and we use plain and simple words that the voter can understand,” Mr Wilders has said.

Mr Wilders was refused entry to Britain in February on the grounds that he had sought to incite hatred with a film he made last year that equated Islam with violence and likened the Koran to Mein Kampf.

The controversial politician is also facing prosecution in the Netherlands for making anti-Islamic statements, following a court ruling the previous month.

Despite the charges many Dutch voters seem to like what Mr Wilders is saying, the BBC’s Geraldine Coughlan in The Hague reports.

His party was campaigning under the motto “For the Netherlands” and was extremely anti-EU, our correspondent says. Mr Wilders has said he will not take up his seat if elected as an MEP.

Polls show that Euroscepticism among Dutch voters has increased since the last European elections, with EU enlargement and integration the most unpopular issues, our correspondent adds.

Across Europe, far-right parties are hoping to win at least 15 seats. However, the centre-right European People’s Party bloc is expected to remain the main force, followed by the European Socialists.