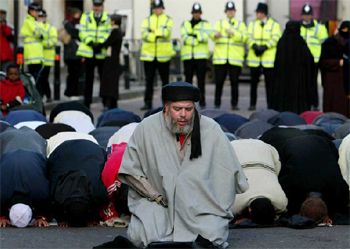 A revelation that more than 200 Muslims living in Britain are currently taking part in a government anti-terrorist detoxification programme, has coincided with a call by the Muslim Council of Britain for followers of that religion to vote against the British National Party.

The existence of the detox programme was revealed in a Sunday newspaper which carried a story about a Muslim youth who had been recruited into an Islamist terror cell in a mosque in London.

According to the report, the scheme is a blueprint for a nationwide programme backed by the Home Office and police chiefs to which 200 people – some as young 13 – have been referred.

The Islamists are recruiting inside mosques all over Britain, according to the reports. They show the young Muslims martyrdom videos and facilitate their travel to Pakistan to receive terrorist training.

The Muslim youth interviewed by the newspaper was quoted as saying: That was the ultimate purpose of what these men were doing: what they were doing was training people up to carry out operations in the UK.

A lot of people think that terrorists are recruited in special recruiting grounds, but the truth is that it actually goes on in mosques a lot of the time, he told the newspaper.

He said that the more advanced recruits had been sent on training exercises to the Lake District and the New Forest in Hampshire, as well as paintballing sessions in the Home Counties.

At the same time, the Muslim Council of Britain (MCB) has urged all Muslims to participate in next months elections to the European parliament by voting against the BNP.

Significantly, the MCB announcement was first carried in the Pakistan Daily newspaper. Active participation of the Muslim community is imperative to prevent . . . the British National Party (BNP) gaining a foothold, the MCB said.

Imams and community leaders were reminded to mention to congregations during weekly prayers on Friday the importance of voting in the elections on June 4 and ensure that they were registered to vote by next Tuesdays deadline, the MCB added.

The Labour Partys website second largest group of visitors comes from Pakistan, a country which has been identified as the source of two thirds of all terrorist plots in Britain.

* The existence of a taxpayer-funded programme to steer Muslims away from extremism confirms the accuracy of the BNPs immigration and foreign policies.

Terrorism in Britain is the direct result of two disastrous policies followed by both Tory and Labour governments:

– Mass Third World immigration which has created a population pool from which Islamists can recruit.

– The worlds Muslim population has been incited by a foreign policy which has waged illegal wars against Iraq and Afghanistan.

Until both these issues are addressed, the spectre of terrorism will loom large over Britain.