Once the troops are home from Afghanistan, I say we sent them to England. That is clearly the most serious threat in terms of Islamic terrorism. 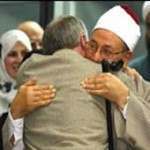 As Ken said when he met the great misunderstood cleric:

“On behalf of the people of London, I would like to apologise to the Sheikh for the outburst of xenophobia in sections of the media which demonstrated an underlying ignorance of Islam.”

He apologised on your behalf to a man who can be seen and heard being misunderstood in this clip:

But, according to Osama Saeed, who leads the Scottish Islamic Foundation, Qaradawi is an “eminent scholar”. Saeed has complained that the BBC accurately reported Qaradawi’s relelant views of violence against women and homosexuals.

Oh, and did I mention that Saeed was last week formally endorsed as a parliamentary candidate for the nationalists in Scotland?

In doing so, the nationalists have become the first “mainstream” party in the United Kingdom to endorse an Islamist candidate