I would like to take a minute and profoundly thank the multitudes of screaming genocidal Muslim protesters who have graced the streets of the civilized world from Canada Europe and beyond since the start of Israel’s retaliation to Gazanian missiles. You bring me huge relief. I really mean this. You do for me what I could never do if I wrote day and night seven days a week attempting to expose the true nature of Islam.

The greatest threat to civilization is the ‘soft Jihad’. The subtle infiltration of institutions of state such as the CBC in Canada or the various human rights commissions or the NDP as has been suggested by Tarek Fatah and other non terrorist Muslims who have been trying to ring the alarm bells in Canada for some time to the threat of more orthodox Islam. This soft jihad has been so effective that the left and center in Canada as well as most European nations have done everything they can to assist the Islamification of the west even including the intolerance of non Muslims hatred of Israel and jews and loss of rights of non Muslims in some ways which is central to Islam yet anathema to Europe’s traditional left.

However the chanting of “gas the jews” in Holland or, “What you need is a bog oven, all the Jews need to be in a big oven” in Florida and similar chants in protests all over the world may actually help wake enough people up to the true nature of Islam that we may beat you. Yes its hard to believe that all the acts of terrorism, the most horrifying that your imaginations are capable of has not done the job for us but it has helped. In this photo from Toronto below I see three flags together. India Canada and Israel. Victimization clearly has drawn India into the fold. They will be a powerful ally once the infidel world wakes up. 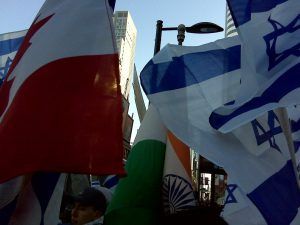 So keep chanting Death to Jews and ‘We will rape your bitches’and by all means march everywhere and everywhen you can. I cannot wake up the people of the world to the threat of Islam alone. I need your help.

Below is an article as a comment on Right Girl’s post about the protest in Toronto. I hope the person who published this comment does not mind me republishing it here but I really feel it needs to be seen especially by any Canadians who think this is some kind of far away problem.

One Reply to “Thank you Muslim protesters.”