Hard to write anything about what is a world shaking atrocity. I’m not sure short of a WMD what could be worse than a bunch of armed men shooting up hotels, hospitals for women and children, a Jewish community center where they are killing the Jews, hotels of historic importance and full of people being firebombed and people shot seemingly indiscriminately. These videos show a lot of whats going on and I will publish below an outline of Stratfor’s analysis of it to the extent their IP rules allow.

“A massive and well-organized attack by militants in Mumbai, India, has left nearly 100 people dead so far, promises to cut deeply into India’s foreign investment prospects and threatens to rock India’s government. As India responds to the attack, its relationship with Pakistan will be front and center, and the potential for a destabilization of relations between the two geopolitical rivals is high.”

Stratfor focuses on the possible geopolitical ramifications of an already unstable India with a great deal of pressure on its government to react to a string of terrorist attacks from bombings in its commercial centers to shopping districts in the past months.

The group now perpetrating the attacks have a new name but are likely just the usual Pakistani ISI supplied (note the use of military explosives not typically available except through an agency like the ISI) usual Islamist suspects.

The crisis is still in full swing with reports indicating that, along with earlier attacks carried out by gunmen on Mumbai’s central train station, a popular cafe and a theater, hostage situations have developed in two of the city’s most prestigious hotels — the Oberoi and the Taj Mahal — as well as in Cama Hospital and the Chabad House, where Jews and Israelis are currently being held hostage. Stratfor sources have said that the attackers approached their targets in boats with Pakistani markings; other sources have said the boats might have been registered in Karachi, Pakistan.”

It would appear that Jewish people are being murdered Chabad House by these attackers.

Potential escalation into war between India and Pakistan is a real possibility because of this. The ISI, Pakistan’s intel service has been accused of being behind a lot of attacks on India and Indian property such as the embassy in Afghanistan. These accusations came from the usually cautious Indian government.

Here is the complete 3rd Stratfor report on this situation which I have received tonight. I strongly recommend reading all of it. 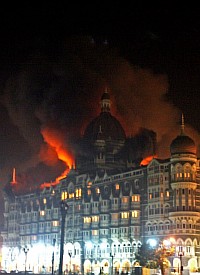 Summary
If the Nov. 26 attacks in Mumbai were carried out by Islamist militants as it appears, the Indian government will have little choice, politically speaking, but to blame them on Pakistan. That will in turn spark a crisis between the two nuclear rivals that will draw the United States into the fray.

Analysis
RELATED SPECIAL TOPIC PAGE
Militant Attacks In Mumbai and Their Consequences
At this point the situation on the ground in Mumbai remains unclear following the militant attacks of Nov. 26. But in order to understand the geopolitical significance of what is going on, it is necessary to begin looking beyond this event at what will follow. Though the situation is still in motion, the likely consequences of the attack are less murky.

We will begin by assuming that the attackers are Islamist militant groups operating in India, possibly with some level of outside support from Pakistan. We can also see quite clearly that this was a carefully planned, well-executed attack.

Given this, the Indian government has two choices. First, it can simply say that the perpetrators are a domestic group. In that case, it will be held accountable for a failure of enormous proportions in security and law enforcement. It will be charged with being unable to protect the public. On the other hand, it can link the attack to an outside power: Pakistan. In that case it can hold a nation-state responsible for the attack, and can use the crisis atmosphere to strengthen the government’s internal position by invoking nationalism. Politically this is a much preferable outcome for the Indian government, and so it is the most likely course of action. This is not to say that there are no outside powers involved — simply that, regardless of the ground truth, the Indian government will claim there were.

That, in turn, will plunge India and Pakistan into the worst crisis they have had since 2002. If the Pakistanis are understood to be responsible for the attack, then the Indians must hold them responsible, and that means they will have to take action in retaliation — otherwise, the Indian government’s domestic credibility will plunge. The shape of the crisis, then, will consist of demands that the Pakistanis take immediate steps to suppress Islamist radicals across the board, but particularly in Kashmir. New Delhi will demand that this action be immediate and public. This demand will come parallel to U.S. demands for the same actions, and threats by incoming U.S. President Barack Obama to force greater cooperation from Pakistan.

If that happens, Pakistan will find itself in a nutcracker. On the one side, the Indians will be threatening action — deliberately vague but menacing — along with the Americans. This will be even more intense if it turns out, as currently seems likely, that Americans and Europeans were being held hostage (or worse) in the two hotels that were attacked. If the attacks are traced to Pakistan, American demands will escalate well in advance of inauguration day.

There is a precedent for this. In 2002 there was an attack on the Indian parliament in Mumbai by Islamist militants linked to Pakistan. A near-nuclear confrontation took place between India and Pakistan, in which the United States brokered a stand-down in return for intensified Pakistani pressure on the Islamists. The crisis helped redefine the Pakistani position on Islamist radicals in Pakistan.

In the current iteration, the demands will be even more intense. The Indians and Americans will have a joint interest in forcing the Pakistani government to act decisively and immediately. The Pakistani government has warned that such pressure could destabilize Pakistan. The Indians will not be in a position to moderate their position, and the Americans will see the situation as an opportunity to extract major concessions. Thus the crisis will directly intersect U.S. and NATO operations in Afghanistan.

It is not clear the degree to which the Pakistani government can control the situation. But the Indians will have no choice but to be assertive, and the United States will move along the same line. Whether it is the current government in India that reacts, or one that succeeds doesn’t matter. Either way, India is under enormous pressure to respond. Therefore the events point to a serious crisis not simply between Pakistan and India, but within Pakistan as well, with the government caught between foreign powers and domestic realities. Given the circumstances, massive destabilization is possible — never a good thing with a nuclear power.

This is thinking far ahead of the curve, and is based on an assumption of the truth of something we don’t know for certain yet, which is that the attackers were Muslims and that the Pakistanis will not be able to demonstrate categorically that they weren’t involved. Since we suspect they were Muslims, and since we doubt the Pakistanis can be categorical and convincing enough to thwart Indian demands, we suspect that we will be deep into a crisis within the next few days, very shortly after the situation on the ground clarifies itself.

MUMBAI – Militants holed up at a Jewish centre in Mumbai, the embattled city where terrorist attacks have killed more than 100 people, have called an Indian television channel to offer talks with the government for the release of hostages.

“Ask the government to talk to us and we will release the hostages,” the man, identified by the India TV channel as Imran, said, speaking in Urdu in what sounded like a Kashmiri accent.

2 Replies to “Mumbai. India’s 911 with profound condolences to the good people of India”