A 17-year-old Libyan refugee girl in Germany named Alaa was stabbed down and critically injured by her ”husband” and her brothers, who filmed the deed.

The brother who did the stabbing is currently standing trial for preparing an Islamic act of terror, and had just been released from custody on February 26.

Alaa’s family then sent the video to her alleged lover. In this version below, that was published by Bild newspaper, the scenes that actually show the critically wounded girl have been blackened out. She can only be heard begging for an ambulance, as she is pregnant – again. She had the first child from her twice-her-age “husband” when she was 16.

“I Delight in Watching Her Die”

A 17-year-old is stabbed down by her husband and her brother in an Islamic rite. Was it an attempted honor killing? It appears the family sent a disturbing mobile video to the victim’s boyfriend after the crime.

This act of violence is blood-curdling: Tuesday evening, a young woman is brutally stabbed down by her husband and her brother. She is critically injured. The two flee. Shortly thereafter, they are arrested on a train in Schweinfurt, 250 kilometers away.

Investigators assume a “relationship incident”, but for tactical reasons they initially did not disclose more. The 17-year-old girl from Libya is married to a 34-year-old Syrian by Islamic law, but not by German law. Both of them came to Germany as refugees.

Disturbing new details have now been disclosed. On Friday afternoon, police announced that it appears that before the deed the 17-year-old wanted to separate from her husband. Was it an attempted honor killing? The cultural and religious background is an important part of the investigations.

According to “Bild” newspaper, the young woman fell in love with an asylum seeker from neighboring Biberach. On the evening of the crime, the family was assembled in the parental home in Laupheim. After an argument escalated, the 20-year-old brother drove a knife into his sister’s chest and critically injured her.

Alleged phone video to the lover

In its Saturday edition the paper printed stills from a mobile video. In it, threatening male voices, and a whimpering woman can be heard.

Another brother — not the stabber — allegedly said “Can you see where I’m standing? I delight in watching her die, and smoke a cigarette whilst doing so.” The video was allegedly recorded in the nursery of the 17-year-old, and sent to the man from Biberach.

The victim was not fit for questioning on Friday. But she isn’t in critical condition any longer, the police spokesman replies to our inquiry. She is in stable condition. The criminal police are still investigating friends and family of those involved. The 34-year-old man and the 20-year-old brother of the badly injured woman are still in custody on suspicion of attempted murder.

The 20-year-old brother is an Islamist, apparently. He is currently standing trial for assisting in the preparation of a grave and subversive act of terror, and for perjury. According to the investigators, he was released from custody only on February 26 — shortly before the deed. The “Stuttgarter Nachrichten” report that the Libyan [husband — translator] had been “on the radar” of the special task force of Interior Minister Thomas Strobl (CDU), who is responsible for the deportation of particularly criminal foreigners and terror risks.

Crimes with a background of alleged violations of honor make the headlines times and again. In February 2005, the German-Turk Hatun Sürücü was shot dead at a bus stop in Berlin. The murder — allegedly committed in the name of honor — created ripples across Germany. Her youngest brother was sentenced to nine and a half years in youth detention.

In the case of the murder of the mother-of-six Hanaa S. from Solingen in 2015, the court established this January that it was a deed “to restore the family honor”.

Translator’s note:
This last paragraph by Die Welt, mentioning only two cases, is quite an underestimation. Ehrenmord.de, who track known cases of Sharia killings in Germany, list 12 attempted honor killings, two of them lethal, just for January 2018, and 77 cases in 2017, 45 of them deadly, others “only” leaving the survivor disfigured. 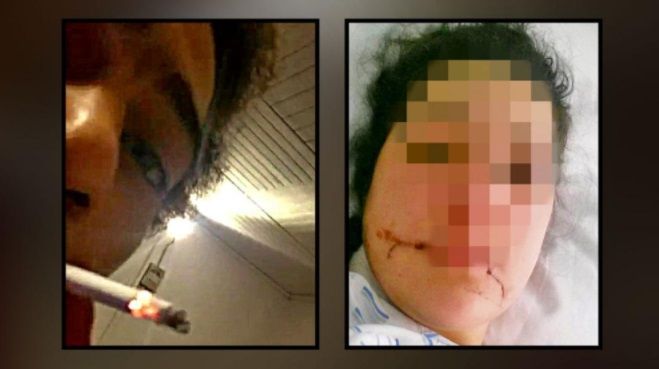 Alaa (r.): her brother stabbed the pregnant girl in the chest and slit open both sides of her mouth.

7 Replies to ““I Delight in Watching Her Die””