An original translation by Nash Montana, and video by Egri Nok with much thanks!

An unmasking of unprecedented proportion is plaguing the Amadeu Antonio Foundation of the ex-Stasi employer Anetta Kahane. She has just recently been crowned as the supreme watchdog in relation to “hate speech on the internet” by Heiko Maas, Germany’s Minister of Justice. And because of a ZDF piece which satirizes this, the Foundation has now activated the Board of Censors (Fernsehrat) to have the satire piece removed from its mediatheque.

When one engages anti-German opinion extremists such as the Amadeu Antonio Foundation as consultants against “hate speech on the internet”, this is the same making the fox guard the henhouse. Insofar as it would be reasonable to question the judgment of Heiko Maas at the time of his decision, when he made Anetta Kahane — who once earned her bread as the STASI Informant “Victoria” — and her Amadeu Antonio Foundation the top consultant in his “task force against Hate speech on the internet”.

On one hand the political milieu from which Kahane stems is famous for launching massive hate campaigns against those that dare to think differently and whose face they just don’t like at the moment, and on the other hand they demand as the self appointed thought police full and complete censorship for the slightest of infractions. The fervor with which the thought police find racism, sexism, anti-Semitism and whatever else they think they find, reminds one astonishingly of symptoms of persecution paranoia.

Just how deep that paranoia is truly anchored shows itself in how the “anti-German milieu” of the radical Left handles criticism about their own modus operandi. Even when the criticism comes along in obvious humorous ways, the professional snitches smell “hate speech”, which then has to immediately be deleted. And now all will be approved under the support of the Minister of Justice in German-speaking social media.

What this means in practical terms is something the ZDF moderator Achim Winter is currently experiencing first-hand. In a humorous satirical man-in-the-street segment, the “Hallo Deutschland” reporter made a little bit of fun of the Amadeu Antonio Foundation and hinted, between the lines, at possible problems that could be created due to their censorship mania.

He also makes jokes about one or the other quirk of the new-left new-speakers. What is one even allowed to say anymore in Germany? Apparently, not very much. Because what follows his report is an unprecedented unmasking of the Amadeu Antonio Foundation as well as of the mainstream media such as Die Zeit or Tagesspiegel.

In a letter to the ZDF, the Foundation first described Winter’s segment as “disturbing”. In familiar victim mentality, they whine about how “deeply affected” they are. And they also bring out the big cannons: the hate-speech experts immediately went to the Board of Censors as well as to the ZDF directors.

One could of course categorize the segment as satire, but it could also be understood as something completely different. The foundation is made the “butt of the joke”, as was Kahane’s chairman Andreas Zick. And something like that apparently comes close to an aggravated insult to Her Majesty itself. Therefore the demand: The satire piece from Achim Winter has to be deleted from the mediatheque! A measure which just recently was also taken in the Böhmermann-Erdogan debacle [the infamous satirical goat-molesting poem].

No less absurd is the demand for censorship of the Amadeu Antonio Foundation against a harmless fun piece is the journalistic support that Tilman Steffen in Die Zeit and by way of second publication presented in the Tagesspiegel. Over entire paragraphs the article protocols the twitter activity of Achim Winter and gets put in the kind of context that makes the argumentation of Kahane and Zick seem plausible. What could be proven: It’s exactly that kind of thought-policing that Winter had made fun of in his piece and had shown as being problematic, that then immediately has been applied in reaction to his piece against his person. And just so that everybody really gets what the exact accusation is, the article about Achim Winter was published under the tag “Right-wing extremism”.

It can be largely predicted how this is going to go from now on: The probability is very high that in the coming days a finely tuned hate campaign against Winter will be launched, during which, among other things, tweets will be unearthed and according to the contact co-guilt principle, the social context of the moderator will be put in the desired spotlight. All that with the maximum goal to chase Winter out of his reporter’s job. The list of those who have been robbed of their basis of existence through the ideological mania of self-appointed Leftists is long. And the internet is a beloved weapon of choice. And so we can clearly see in the case of Achim Winter, what the real problem is in Germany: The most dangerous “hate speakers” are currently advising the Federal Ministry of Justice. 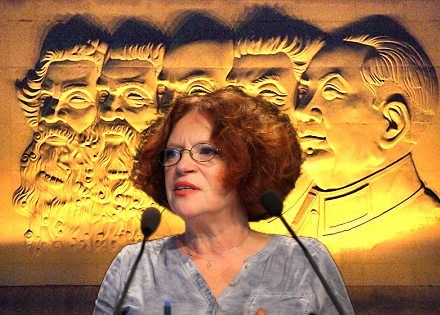