An original translation by Brunhilde with much thanks

The events in Cologne were just a prelude: Many Arab migrants bring very misogynistic social values to Germany. That makes it almost impossible for them to be integrated. A guest commentary. Photo: picture alliance / ZBDer   Author: Bassam Tibi, 72, is a Political Scientist Emeritus at the University of Göttingen. He arrived in Germany at the age of 18 from Syria.

Is there any connection between the attacks on New Year’s Eve in Cologne and the situation in Syria? The answer is: Yes, there is a connection and the common denominator is violence against women.

Many of my German discussion partners do not seem to understand the violence that is directed against women in a oriental patriarchal culture.  In the orient, a woman is not considered an entity, but an object of a man’s honour. The violation of a woman is not viewed only as a sexual act and crime against the woman herself, but more as an act of humiliation of the man to whom she belongs.

In this barbaric war in Syria, that completely erroneously is called a “civil war” (no citizens, but rather ethno-religious collectives, are fighting each other in it), the Shiite-Alawite soldiers of the Syrian army rape women of the Sunni opposition as a method of warfare.

With rape, these Alawites are seeking to dishonour the men of the Sunni opposition. The Sunni “rebels” for their part do the same with Alawite women. It is a war of all against all with women as pawns.

Cologne was not an isolated case

As a Syrian from Damscus, I am astonished at the ignorance and naïveté of the Chancellor and her defence minister, who believe that they can end the war with conferences in Geneva and Munich. But this war should be categorized as a “protracted conflict” that will be with us for many years. It is a type of war that I call “an irregular not state-run war.” 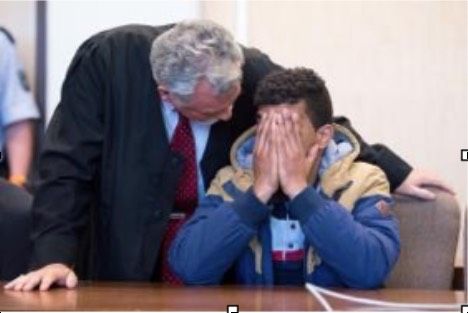 Among the war refugees, there are not only victims of violence but also many perpetrators, and even numerous Islamists. Added to that is the fact that these predominantly young men aged 14 to 20 bring with them the culture of violence, including against women, from the Near East to Germany. New Year’s Eve in Cologne is just a demonstration of that, and no isolated case as our politicians like to pretend in order to downplay the significance of the matter.

Independent of the war, the image of women in the Arabic-oriental culture is patriarchal, even comprehensively inhuman. This image of women must not be tolerated in Europe under the mantle of respect for other cultures.

And for the Arab man, the sexual violence is not just about the “sexual attraction” of the European woman but also about the European man, whose honour he wants to besmirch. And that is what happened in Cologne.

Cologne was just the beginning. If Germany brings in over a million people from the world of Islam and does not fulfil their expectations, we had better be prepared for a few things. From advertisements, all these young men think that they know that every European has a luxury apartment, a car and a “pretty blonde”; they think that they will get all that too and join in the prosperity.

But when these young men instead end up receiving emergency accommodation in school gyms or sports arenas, they feel like they have been deceived and discriminated against. So they develop a desire for revenge against the European man. The disappointed and enraged Arab men therefore took their revenge in Cologne and Hamburg against German men, represented by their women.

As a Syrian who represents an enlightened Islam and who advocates respect for women, I say: That was a culturally anchored act of revenge. What should be criticized here is not only the much lamented false tolerance, but also the ignorance about other cultures.

The conflict in Syria between Sunnis and Alawites, which has developed into a bloody war, will accompany us for many years to come. The number of the dead meanwhile amounts to about half a million Syrians, among them one hundred thousand Alawites; the rest are Sunnis. This kind of conflict is difficult to resolve. An example of this from the past is the Lebanon conflict between Christians and Muslims that lasted from 1975 to 1990, that is 15 years.

In Syria the conflict has a long history. The Syrian capital Damascus is the oldest continuously inhabited city in the world; from 661 to 750 it was the capital of the Omayyad kingdom, that is to say the first imperial Caliphate of Islam that stretched from Spain to western China.

In the late 19th century, Christians and Muslims adopted the European idea of the Nation, in which both had equal rights (therefore different from the Caliphate, where Christians were considered second class believers). Secular pan-Arabism arose from this. After the dissolution of the Ottoman Empire, Syria became a mandate of France from 1920 to 1945, and after that an independent secular republic.

In this secular Syria I was born in 1944 in Damascus, an offspring of the Ashraf aristocratic family Banu al-Tibi. The orientation of our values was: Religion belongs to Allah, but the fatherland belongs to all. That’s what the Sunni majority thought, about 70%, and lived in mutual respect with a large number of religious and ethnic minorities.

Damascus was a peaceful city with a Christian and a Kurdish quarter. That changed after 1970, when the Alawite-Shiite General Hafiz al-Assad seized power. In the years that followed, he succeeded in filling all key positions in the army and security services with Alawites.

Inspired by the Arab spring of 2011, there was an uprising of the Sunni majority against the Alawite rule from which the current war arose. A bloody line of enmity, laden with a strong desire for revenge, between Sunnis and Alawites characterizes this conflict. Alawites and Sunnis do not have a common future.

Neither regional nor international powers are able to gain control of this conflict. In the Syrian conflict, it is important to understand that Putin is not employing his Russian military power out of sympathy for Assad, but solely in an effort to force the West to recognize Russia as an equal actor. At the Munich security conference in February of 2016, it became clear that Putin had achieved this goal.

The conflict in Syria is illustrative of a continuing process of disintegration of states in the Near East. This is currently also happening in Iraq, Libya, and Yemen. The consequence of this will be that in the coming years, massive demographic avalanches are in store for Europe.

Thanks to the invitation of Chancellor Merkel, Germany is the primary destination of the refugees. But the other Europeans are not playing along. The children’s squabble among all German parties about upper limits and limiting the number shows that German politicians do not understand the dimension of the problems.

Early in 2015 following the murders in Paris, Chancellor Merkel participated in a public demonstration in Berlin shoulder to shoulder with Islam functionaries who vehemently oppose a European Islam, and still she doesn’t even know what she is doing. Her Syrian and refugee policies lie along this line.

While German politicians and German Gutmenschen speak about tolerance and the misery of the refugees “in a German pathos of the absolute” (Adorno), the Islamists laugh contemptuously and call these debates “Byzantine blather.”

Far and wide no Euro-Islam

The origin of the term is revealing: In the year 1453, the Byzantine capital Constantinople was besieged by an Islamic Ottoman army. During this siege, Byzantine and Christian monks exhausted themselves in debates about magical and religious formulas, despite the seriousness of the situation.

In the same year, 1453, the Islamic Sultan Mehmed II successfully conquered Constantinople with his troops and transformed the city into an Islamic Istanbul. Since that time Islamic historians have therefore called such debates “Byzantine blather.”

As a Syrian from Damascus, I have been living in Germany since 1962, and I know: Patriarchally minded men from a misogynistic culture cannot be integrated. A European, civil Islam that the Islamic functionaries in these parts have rejected as Euro-Islam, would be the alternative. At the present time, it doesn’t have a chance. My teacher Max Horkheimer called Europe “an island of freedom in an ocean of dictatorships.” Today I see this freedom endangered.

We publish this text with the kind permission of the publishing house Kiepenheuer & Witsch. It is a preview of the book by Alice Schwartzer, “The Shock – New Year’s Eve in Cologne,” to be released in May.

[note: Despite the heavy dose of reason and truth, unusual in any MSM article in the West today, there is still a great deal of irrational leftist equivocation. No, the Muslim culture is not ‘Patriarchal’. A weaponized feminist term invented to use like the US army uses laser painting a target. And no, it is not because muslims feel “discriminated against” but because it is a core aspect of the hijra, or Islamic migration into western lands in order to conquer it. Short of that it is still interesting how much truth there is for a large and influential German site)

3 Replies to “Women’s Rights: Young men who bring a culture of violence with them”