This does look a little like an Italian Golden Dawn. 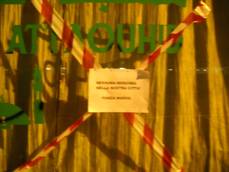 (ANSA) – Pesaro, March 29 – Members of the neo-fascist political party Forza Nuova who sealed off a gym being used by the local Muslim community as a mosque in the Marche city of Pesaro said that they were protesting the “wild and uncontrolled immigration” choking the country.