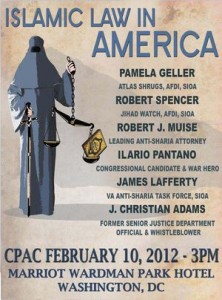 The following is the presentation given by Robert Muise, who is the co-founder of the American Freedom Law Center, at the CPAC 2012 event hosted by Pamela Geller and Robert Spencer.

To say that Robert and Pamela had some difficulty in staging the “Islamic Law in America” lectures, would be an exercise in understatement. It was clear from the beginning that the CPAC organizers were desperate to undermine and marginalize discussion of Jihad and Sharia at the foremost conservative political conference in the world, and that alone should be reason enough for them to be ashamed of themselves.

But to do so in such a crucial election year? That’s both startling and dangerous!

All of the videos and presentations given by the speakers are fascinating and well worth a look. They can be reached at the YouTube page of user: “payakhall”.