See now, Anjem and his crew could really help to clean up crime in England by stopping committing them from time to time. Then he wouldn’t need his sharia police so much.

Guilty: Stephanie Knight sobbed as she was found guilty of conspiracy to rape

A teenage girl who lured two white youngsters out and provided them for sex to three Asian men she referred to as ‘my boys,’ was convicted of conspiracy to rape today.

Stephanie Knight, then 17, invited the two 16-year-old girls for a night out clubbing during which they were plied with vodka and drugs and introduced to the group.

Later the girls were taken by Shahid Hussain, 37, his brother, Amjad Hussain, 34, and their cousin, Tanveer Butt, 39,to a dark and empty house without electricity in Accrington, Lancashire where they were sexually abused.

The three men were said to have taken it in turns to abuse one of the teenagers who was repeatedly raped in different rooms of the house which one of the men used to live in.

Knight, who was to tell police she was Amjad Hussain’s girlfriend, was said to have stopped one of the teenagers from going to her screaming friend’s help as she was raped three times by Shahid Hussain.

At Burnley Crown Court, Knight, now 18, of Queen Street, Rawtenstall, was found guilty of conspiracy to rape and aiding and abetting rape.

Amjad Hussain of Sharples Street, Accrington was found guilty of conspiracy to rape, rape and assault by penetration whilst Shahid Hussain of Drake Street, Rochdale, was convicted of rape.

Butt, 39, of St Alban’s Street, Rochdale, was found guilty of conspiracy to rape, aiding and abetting rape and rape.

Judge Beveley Lunt told the jury, which took three hours 12 minutes to reach its verdicts: ‘The defendants, I can tell you, are looking at long prison sentences.’ She added they would be on the sex offenders’ register, probably for the rest of their lives.

The Hussain brothers, who both have partners, protested their innocence as they were led away from the dock after being remanded in custody.

Shahid Hussain shouted: ‘I have not done this’ and his brother added: ‘We are innocent.’

Nick Courtney, prosecuting, told the court the girls were provided with alcohol and drugs before they became the victims of a number of sexual offences between December 4 and 7, 2009.

Tanveer Butt, at a previous court appearance, was found guilty

Amjad Hussain, at a previous court appearance, added vodka to the girls’ drinks

Shahid Hussain, at a previous court appearance, denied the accusations

Mr Courtney said Knight who had known the girls for about a week invited them out for the evening, on December 5.

During the evening out she was heard to say ‘Got them’ in a mobile phone conversation and named the girls.

Drink was bought in Accrington and the car was parked at Asda, Burnley and was captured on CCTV. 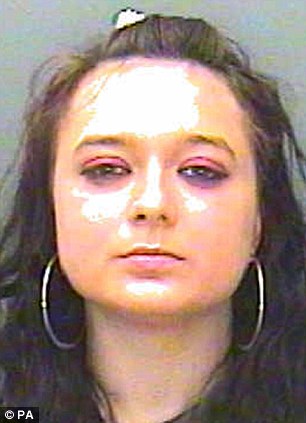 Stephanie Knight lured the youngsters out to go clubbing, before the teenagers were subjected to a horrific rape

Amjad Hussain added vodka to some bottles of coca cola before giving them to the girls, who were also given drugs to smoke.

Both girls made the men aware they were 16 but both had a lot to drink. Mr Courtney said: ‘They all had a drink but both girls felt they had a great deal of alcohol to drink.

One recalled she was ‘feeling smashed’ and the other said that on a scale of one to 10 of drunkenness she rated a 10.’ They were then driven to Amjad Hussein’s former home where Shahid Hussain was waiting upstairs.

‘When they went into the house all of the lights were off,’ said Mr Courtney.

‘There was some carpet but no furniture downstairs. It looked empty and Stephanie Knight told them there was no electricity.’

The other girl then argued with Knight as she heard screams from her friend, the court was told.

On the way, he allegedly orally raped them both and committed a sex act on the second girl, after threatening her with a knife.

Convicted: The trio protested their innocence but were found guilty of their parts in the girls’ horrific ordeal

Amjad Hussain claimed he had consensual sexual encounters with each of them on the night.

After the verdicts Det Sgt Paul Langley, from Lancashire Police said: ‘These two girls thought they were going for a night out and instead were given alcohol and drugs and taken to a strange house where they were subjected to an horrific sexual ordeal at the hands of three much older men.

‘What’s worse is that this abuse was facilitated by someone the victims believed was their friend.

‘While many victims of child sexual exploitation do not see themselves as victims and have acted voluntarily, it is clear in this case that these girls’ actions were neither voluntary nor consenting.

‘Regardless of offenders’ social or ethnic background they are abusing young people and we will continue to target, warn and prosecute them. This behaviour is not just unacceptable, it is criminal.

‘We will continue to work to identify youngsters at risk of exploitation and to prevent them getting caught in a cycle of abuse.’

The four defendants, who denied all the charges, will be sentenced on September 2 at Preston Crown Court.