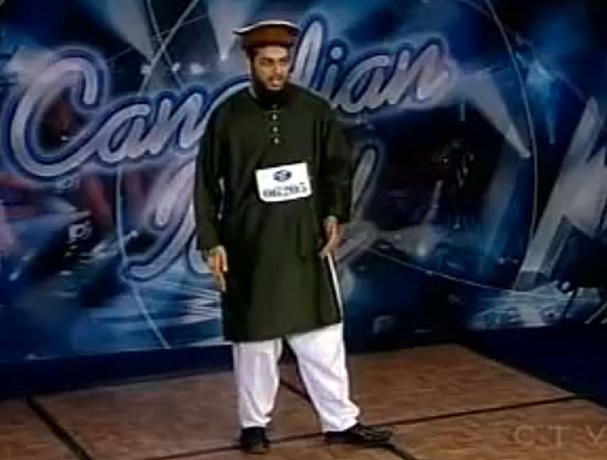 Khuram Sher auditioned for season 6 of Canadian Idol. Sher was detained Aug. 26, 2010 as part of an RCMP national security investigation.

OTTAWA—A third terrorism suspect– one who moonwalked across a Montreal stage during an audition for Canadian Idol – was detained early Thursday.

Khuram Sher was arrested as part of an RCMP national security investigation, as police continue to investigate a possible cell allegedly plotting to attack targets at home.

Sher told judges on the popular reality show in 2008 that he hailed from Pakistan and was a fan of “hockey, music and acting.”

He sings an off-tune rendition of Avril Lavigne’s “Complicated” with – as the show’s website describes – some “nifty” dance moves.

“Have you ever thought of being a comedian?” asks one of the judges of the 26-year-old.

Another remarks: “The dance moves were good, the singing, bad.”

One source close to the investigation said Sher was actually a Canadian-born physician and graduate of McGill University – quite a different persona from goofy contestant wearing a traditional Pakistani shalwar kameez and pakul hat as he performs robot dance moves and a Michael Jackson moonwalk.

Early Wednesday, two other alleged members of a group police believe were trying to form a local terrorism cell were arrested in Ottawa.

Ottawa’s Integrated National Security Enforcement Team had been tracking the men for months and one of the suspects is alleged to have ties to high-level Al Qaeda affiliates abroad, sources close to the case told the Toronto Star.

Known as “Project Samosa,” the RCMP investigation reportedly began with intelligence passed on by the Canadian Security Intelligence Service.

The plot involved Canadian targets but was not “specific,” said a police source, adding that the arrests happened quickly since one suspect was planning to travel abroad. The alleged ringleader had reportedly travelled earlier to the border region between Pakistan and Afghanistan in search of training.

The RCMP released only a short statement Wednesday confirming that the two Ottawa residents were taken into custody at 8 a.m. and that “search warrants are being executed in order to secure additional evidence.”

A news conference in Ottawa is scheduled for Thursday.

A source confirmed Wednesday that Misbahuddin Ahmed, listed as owning a car seized by police, was one of the accused. The name of the second suspect, Hiva Ali Zadeb, was disclosed Thursday by his Ottawa lawyer, Oliver Aberjel.

Ahmed had worked for two years as a general radiography technologist at Ottawa’s Hospital Civic Campus.

Guy Morency, the hospital’s director of diagnostic imaging, told the Star in an interview that Ahmed was a “stellar technologist.”

“We’ve had no complaints about him,” he said.

Morency said he had only met Ahmed a couple of times in meetings and described him as rather “nondescript.” But he did recall that Ahmed was able to provide “excellent” references from Montreal before he was hired.

“We were very pleased with what we heard and received and he has proven himself since.”

Morency, who was on vacation this week, said he would go into the hospital Thursday to speak with the department’s employees.

“Obviously this is going to be upsetting for a lot of people.”

Neighbours living on the west-end cul-de-sac where the 26-year-old suspect lived with his wife and baby said the raid was shocking.

Burtt said she believed the young Muslim couple had lived in the townhouse for about six months.

“I’d wave and say hello but I don’t think they gestured to me at all,” she said.

Nathan Aubie, who lived beside Ahmed, said he had only seen the couple three or four times but that “they seemed like friendly people.”

A second location, a seven-storey apartment complex about five kilometres away, was also raided early Wednesday. The windows of the apartment police searched were covered with patterned embroidery and five police cruisers still idled outside the building late in the day.

Some within Canada’s Muslim community said they were angered by Wednesday’s arrests, while others cautioned against indicting the accused before any evidence is known.

Salma Siddiqui, the Muslim Canadian Congress vice-president said in a telephone interview that he was “livid and frustrated” that young Muslim men were still being seduced by the idea of fighting a holy war in the name of Islam.

“Why are they not understanding that this is not acceptable? Why are they still going on accepting the doctrine of jihad? That is the where the whole problem is.”

It is the second time since 9/11 that an RCMP Integrated National Security Enforcement Team has arrested a group of Canadian suspects planning to strike at home.

In June 2006, a group of young Muslim men dubbed the Toronto 18 were rounded up and prosecuted for plotting to attack downtown targets and a military base north of the city.

Of the 18 who were charged — 14 adults and four youths — 11 were eventually convicted. Charges against seven of the accused were dropped.

Zakaria Amara, one of the group’s ringleaders, pleaded guilty last year, confessing that he had been developing a series of bombs for the attacks that he hoped would force Canada out of Afghanistan. He was given a life sentence.

The case was seen as a wake-up call for Canadians and heralded as a successful test of the country’s anti-terrorism laws, which were introduced after 9/11. It was also held up as a model of co-operation between the Mounties and CSIS — organizations that had been plagued for years by mistrust and rivalry.

Critics of the Toronto18 case accused the RCMP of casting the net too wide and questioned whether police informants inside the group had unduly influenced the suspects.

While there are no known ties between the Ottawa suspects and those arrested in Toronto, the cases may have similarities in the way they were investigated — and play out in court.

Some of the details in the case hint that police will present a case of what’s commonly called “homegrown terrorism,” meaning Canadian citizens who become radicalized in the West and then often seek connections and training abroad.

Reacting to the arrests, a spokesperson for Public Safety Minister Vic Toews said the case shows “Canada is not immune from international or homegrown radicalization.”

“Our government monitors national security concerns and is vigilant in protecting against any threats,” spokesperson Christopher McCluskey said.

“As for operational security matters, and matters currently under police investigation, we cannot further comment at this time.”

With files from Allan Woods and Isabel Teotonio