Now this is a splendid idea. May 20th everyone draw a Mohamed toon and display it prominently. If you have no artistic talents, may I suggest you take your favorite image of Mohamed down to your local shopping mall and find that guy who makes T shirts and get him to make you one with whatever image you download off the net? May I suggest this one for example? 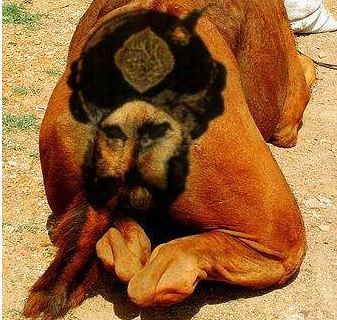 Usually they charge about twenty dollars, and lets be honest Twenty bucks and an hour of your time to maintain freedom of speech, this is not much to ask to preserve civilization. And no, this is not an exaggeration. Civilizations have fallen to superstition, barbarism and primitivism before. Let us at least draw a picture or make a T shirt to help stop it from being lost now.

Here is a site with some images of Mohamed if anyone wants to use these. Ironically, the more disgusting ones are in some cases, the more historically accurate. H/T Proud Kaffir for this one.

Found on the I.F.P.S web site with credits below:

After Comedy Central cut a portion of a South Park episode following a death threat from a radical Muslim group, Seattle cartoonist Molly Norris wanted to counter the fear. She has declared May 20th “Everybody Draw Mohammed Day.”

Norris told KIRO Radio’s Dave Ross that cartoonists are meant to challenge the lines of political correctness. “That’s a cartoonist’s job, to be non-PC.”

Producers of South Park said Thursday that Comedy Central removed a speech about intimidation and fear from their show after a radical Muslim group warned that they could be killed for insulting the Prophet Muhammad.

The group said it wasn’t threatening South Park producers Trey Parker and Matt Stone, but it included a gruesome picture of Theo Van Gogh, a Dutch filmmaker killed by a Muslim extremist in 2004, and said the producers could meet the same fate. The website posted the addresses of Comedy Central’s New York office and the California production studio where South Park is made.

“As a cartoonist I just felt so much passion about what had happened I wanted to kind of counter Comedy Central’s message they sent about feeling afraid,” Norris said.

On her website Norris explains this is not meant to disrespect any religion, but rather meant to protect people’s right to express themselves.

© 2010 The Associated Press. All rights reserved. This material may not be published, broadcast, rewritten or redistributed. Learn more about our Privacy Policy.

5 Replies to “Everybody Draw Mohamed day!”