Frashta didn’t want to marry her cousin, and she fled. In a land where tradition and family honor are everything, that sealed her doom. 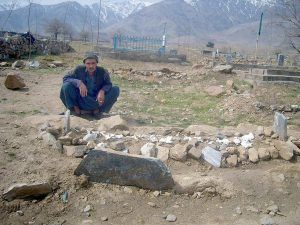 Dal gazes at the unmarked grave of his niece outside Charikar, Afghanistan. "She kept saying, 'I can't marry my cousin. If my mother gives me away to anyone else, I will marry him,' " he said.

LA TIMES… Reporting from Charikar, Afghanistan – A child of the provinces can never run far. She should have known this. Frashta, though, was headstrong. Two shots from a hunting rifle in the night, then they rolled her in cloth and tried to hide her, but some things cannot be hidden. She was found in the yard.

“So beautiful that no words could describe her face,” said her uncle.

No one had a photograph; a picture wouldn’t tell the story of who she was anyway. A young bride who betrayed her marriage for another man. Or a woman who spent her short life peering through the mesh of a burka until one day she defied family and tradition and ran away from home after refusing to wed her cousin. In this land, both are dark, dark sins.

What would end her life began when she was a few months old. Word came that her father, a mujahid, had been killed in a battle with Soviet troops in the late 1980s. As is custom, Frashta’s mother became the second wife of her husband’s brother, Abdul. To ensure clan harmony, a match was quickly arranged for Frashta: When the girl came of age she would marry Abdul’s son, her cousin.

The repressing years of the Taliban came and went with the U.S.-led invasion of Afghanistan in 2001. The town of Charikar, divided by a canal and surrounded by mud-brick homes and fields that stretch across a valley, grew tense with crime and war. Machine guns appeared on the roof of the police station. The markets in Parwan province stayed busy, though, with buyers and sellers and boys hauling goods in wheelbarrows.

With each season, Frashta grew taller, twirling her long black hair into a scarf, drawing closer to the day she would marry Tor Baz. Like her, he had no last name. Most villagers here take one only if they enroll in a university or for other important matters, like a faraway job.

“I think she got as far in school as the ninth grade,” said Dal, her mother’s brother and an unemployed fruit seller. “She was fast and I think she was stronger than me. If we ever got into a fight, I’m sure she would have won. But she was living in a very bad family and did not want to be there and did not want to wed her cousin.”

When she was in her early 20s, she did marry, according to police. Village elders gathered one day and blessed the union; what had been promised years earlier came to pass. A mullah read from the Koran and men hurried through the streets, delivering Tor Baz to Frashta for the couple’s first night together. Doors and shutters closed.

Trouble quickly followed. Frashta’s stepfather and grandmother, who had arranged the marriage, told police that Frashta had a secret life. They said that 45 days after the wedding, in the summer of 2009, she escaped with another man, a shopkeeper, and headed for Kabul, the capital, two hours south. Dishonor had befallen the family.

That is not the Frashta who appeared one day at a women’s shelter in Kabul. This Frashta said she had refused her cousin and escaped after she was drugged by her grandmother and beaten by her stepfather.

“There was never a marriage, but the family was demanding one. Frashta told me that she kept telling them: ‘Don’t say I am engaged to my cousin. I hold him as a brother, not as a husband,’ ” said Parween Rahimi, a caseworker at the Afghanistan Independent Human Rights Commission. “Her grandmother came into her room one morning and gave her drugs, some kind of tablets, and told her, ‘Don’t say these bad things again so your father doesn’t hit you.’ ”

Frashta said that when she awoke, her grandmother told her that while she was unconscious her cousin had had sex with her, and she must marry him to protect her reputation.

Rahimi said it was a ploy to force Frashta to bend to the family’s will; a medical exam, according to the rights commission, showed the young woman was a virgin. Documents are tough to come by in Afghanistan: the commission had no copy of the medical test and it is unclear who ordered it; the police had no proof that Frashta freely accepted marriage.

“Her grandmother came to our office and tried to convince her to come home, but Frashta sat very far from her that day,” Rahimi said.

Police tracked her down and charged her with leaving her husband, a crime and an affront to the patriarchal order. The shopkeeper was also arrested.

Mohammad Iqbal Ahmadi, chief prosecutor in Parwan province, said Frashta’s story to the rights organization was fantasy and that no tests were done to determine her virginity.

“Her cousin told us she had an affair with another and that she was receiving phone calls from men, and this proves she was not a good girl,” Ahmadi said. “If she felt threatened, why didn’t she make a complaint to police?”

The shopkeeper, Meir Agha, testified at a hearing that he had never touched Frashta and had only helped her travel to Kabul. He and Frashta were sentenced to five months in prison. Upon her release in the autumn, Frashta refused to return to the house of her cousin and her stepfather, Abdul.

She moved in with Dal, a slim, nervous man, who lived with his family in a house behind a courtyard wall off the main road leading to Charikar.

She was given a room in the back with mustard and white walls and a seed sack for a curtain. It was sparsely decorated, a few Koran verses and a poster of Sydney, Australia, with the caption “If you would be wealthy, think of saving as well as getting.” When she went out, like most women here, she draped herself in a burka, a swath of blue indistinguishable from other swaths drifting through markets and beyond mosques.

“She didn’t like Abdul’s family. She said Abdul was addicted to hash and beat her often,” Dal said. “She kept telling me this. During those three months she lived with us, she and I would talk about how to solve this problem. She kept saying: ‘I can’t marry my cousin. If my mother gives me away to anyone else, I will marry him, but not my cousin.’ ”

Her refrain was challenging the heart of tradition, in which rural Muslim women accept what is expected of them and bear their grievances quietly. No matter which version of Frashta — fallen woman or abused virgin — is the real one, she was adamant that she would never live with Tor Baz.

Then on Jan. 19, an offer of reconciliation came from the elders.

“They invited us to her father’s house for dinner,” Dal said. “She accepted. She was afraid and I went with her. When we got there, they greeted her well. They started playing music and everyone seemed happy. Her grandmother was there, saying mistakes had been made. The family wanted to resolve this.

“They served a dinner of meat and rice and the elders gave advice. They said it wasn’t good for her to be separated from her cousin and her family. The elders left.”

Frashta was ready to leave too, but the family urged her to spend the night.

“They wanted her to stay, but she told them that she promised me she’d return to my house,” Dal said. “She told them she would be back tomorrow with her belongings. It was late and I wanted to go.

“We came out of the house and I was walking ahead of her. Everyone was saying goodbye and then I heard a voice, ‘Turn back, turn back.’ Frashta told them, ‘Don’t force me, I will come back tomorrow.’

“Then I heard two shots from a hunting rifle. I thought they were trying to scare her, but I felt pellets sting my clothes. I ran to the police station.”

Neighbors heard the shots too; shouts and commotion spread through the moonlight.

“The police returned with me and we searched everywhere for her,” Dal said. “We couldn’t find her. I thought maybe she had escaped, but then we saw her lying on the ground, covered by a cloth. One shot hit her in the back of the head, the other in her back. I don’t know why it went so badly. Everyone had seemed happy. I just don’t know why.”

Hours later Rahimi received a phone call. There were reports that Frashta was dead. Would she check? Rahimi said she went to the morgue and saw Frashta, her unveiled hair long and full, and not a blemish on her face, only a bloodshot eye.

Her great-uncle Agha, her grandmother’s brother, confessed. “I killed her. She dishonored the family,” he told the police. Agha, her grandmother and two other women were arrested and are awaiting trial. The prosecution is seeking the death penalty for Agha, which police said was in accordance with Islamic law.

Frashta’s belongings have been cleared from her room in Dal’s house. It is empty, except for the poster of Australia and verses from the Koran. The floor is cracked; it feels like a storage room, cool and tucked away behind a grape arbor and sleeping dogs.

Faded green flags and litter blow in the cemetery at the base of a mountain. A few cows wander. The richer among the dead lie in graves bordered by fences, but not Frashta. Her plot is ringed with weathered rocks and soon will become even with the land. The gravestone is rough shale; nothing is written, as if she isn’t here, lying at the foot of a mountain thick with snow.