More than 120,000 people had last night signed an internet petition protesting about plans by Islamic extremists to march through Wootton Bassett.

The firebrand cleric said 500 of his supporters would carry ‘symbolic coffins’ in memory of the Muslim civilians ‘ murdered by merciless’ coalition forces. 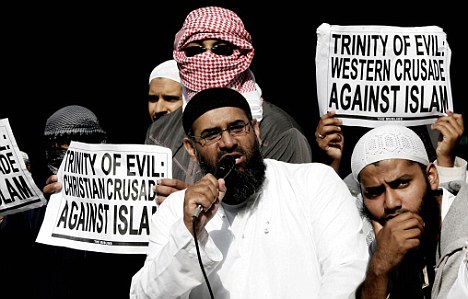 Hate preacher: Anjem Choudary, centre, and his followers plan to protest through the town of Wootton Bassett, Wilts.

In remarks designed to cause maximum offence, he compared fallen British heroes to Nazi stormtroopers and the September 11 and July 7 terrorists. He even claimed his plan was backed by families of servicemen and women.

But MPs, military chiefs, moderate Muslims and councillors expressed horror that 42-year-old Choudary was ‘hijacking’ the town for political purposes. In less than 48 hours, more than 120,000 people joined a Facebook campaign opposing the march by Islam4UK, which calls itself a ‘platform’ for the banned extremist group al-Muhajiroun.

Petition organiser Jo Cleary, who works with service families, urged supporters to express their ‘alarm and distress’ to Wiltshire Police in a bid to stop the plan.

She said: ‘This group can march anywhere it wishes in the country but has chosen Wootton Bassett to cause outrage and offence. We need our politicians to make a statement saying that this march will never take place.’

Peter Fullarton, whose son James, 24, was killed by a Taliban bomb only weeks after proposing to his fiancee last year said the Government must ban the march or risk an ‘uproar’.

He said: ‘Not only will it be an incredible insult to our war dead and to the fantastic town of Wootton Bassett, but there could be a riot, white extremists could use it as justification for attacks, people could end up being killed. We lost 108 soldiers in Afghanistan last year. For them, if for nobody else, these sickening plans must be stopped.’

Steve Minter, whose son-in-law Serjeant Paul McAleese was also killed by a bomb, said: ‘I am all for free speech, but this is an abuse of our tolerant democracy.

‘Too many of these extremists have been allowed to make Britain their home because they have won the right to political asylum, then they abuse our decency by putting forward views that would lead to execution in their own country.

‘If this march goes ahead – and I hope to God it does not – the police will have an awful job on their hands. I for one will be there to protest.’ 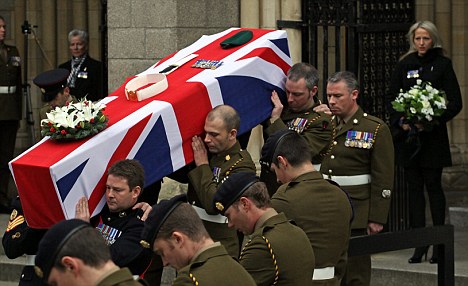 Shahid Murasaleen, from the moderate Muslim group Minhajul-Quran International UK, said: ‘Extremists like these always claim to speak for Islam and British Muslims yet they are not qualified to do either. This march will achieve nothing other than to incite hate crime against innocent law-abiding Muslims.’

The market town near Swindon has become a symbol of the public’s respect for the troops who make the ultimate sacrifice. Hundreds of mourners line the High Street to pay silent tribute to service personnel repatriated through nearby RAF Lyneham.

Former mayor Chris Wannell said: ‘We are a traditional old English market town who honour very much our Queen and country. If this man has any decency about him he will not hold a march through Wootton Bassett.’

Wiltshire Police confirmed that they were aware of the plan, although Choudary had not contacted them. Islam4UK will have to tell police the date, time and route of a proposed procession.

A police spokesman said: ‘If a march is believed to be likely to result in serious disorder, disruption or damage, then the police can impose conditions upon the organiser.

In exceptional circumstances, police may apply to the local authority for an order prohibiting such a march.’