By US rules one wonders whether or not the government of Australia should have its assets frozen according to the various terror financing regulations. Frankly it may not be a bad idea. Could force some rational policies. Same goes for England and Canada. And with near certainty all western nations that allow mass immigration of Muslims and offer welfare payments. Come to think of it, I bet the US itself through government programs pays out more to Islamic terror than many Muslim ‘charities’.

Profile: Abu Bakr BBC H/T with thanks to dontbendoverforallah 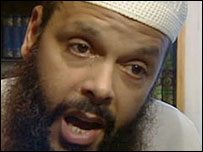 The man accused of being the spiritual leader of a group planning terrorist acts in Australia first came to prominence in August when he praised Osama Bin Laden as “a great man”. Abdul Nacer Benbrika, also known as Abu Bakr, made the comments in an interview with Australia’s ABC radio, after it emerged that the country’s security services had taken away his passport.

Mr Bakr, 45, was charged on Tuesday with being a member of a terrorist organisation between July 2004 and November 2005.

He was also charged with directing the activities of a terrorist organisation, and remanded in custody to reappear at Melbourne Magistrates Court on 31 January.

In the ABC interview, Mr Bakr said he was just a teacher, and that his strong Islamic beliefs had led to his being targeted.

“I am not involved in anything here. I am teaching my brothers here the Koran and the Sunna, and I am trying my best to keep myself, my family, my kids and the Muslims close to this religion,” he told ABC.

But Mr Bakr’s comments about Osama Bin Laden were condemned by both the Australian government and mainstream Muslim groups.

Mr Bakr, who was born in Algeria, has lived in Melbourne since 1989, where he arrived on a one-month tourist visa.

He spent several years battling immigration authorities for the right to stay permanently. According to media reports, among his reasons for seeking residency was his “love of the Australian lifestyle”.

He now has dual Australian-Algerian nationality.

But his passport was taken away by the Australian Security and Intelligence Organisation (ASIO) in March, after it was ruled that he might “prejudice the security of Australia or another country” if allowed to travel overseas.

He is married and has six children.