BBC NEWS … A Muslim community leader from Essex has been arrested on suspicion of perverting the course of justice. 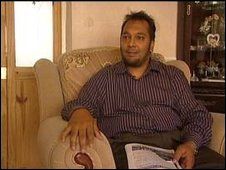 Noor Ramjanally, 36, from Loughton, claimed he had been abducted and bundled into a car on 24 August.

Mr Ramjanally said the alleged kidnappers warned him to stop running a weekly prayer meeting in the area.

A police spokeswoman said they had investigated an allegation of abduction and a 36-year-old man was being held at Harlow police station.

Last week Mr Ramjanally told the BBC kidnappers “knocked at my door and when I answered, they grabbed me by the wrists and marched me to their car”.

He added: “I was thrown into the boot and then they drove me to nearby Epping Forest and threatened me.

“I was very scared, they had a knife placed right against my back.”

He said he believed a leaflet campaign by the British National Party (BNP) in the area had prompted the alleged attack.

But Councillor Pat Richardson, leader of the BNP group on Epping Forest District Council, denied any knowledge of the incident and added: “It’s terrible, I don’t agree with these illegal actions.”

This is not the first time Ramjanally has made claims of racist attacks against him. He has also reported recieving hate mail and having his home firebombed. I wonder if his Sharia compliant insurance will be investigating?