Okay, I’m only kidding about the badge for tying knots. 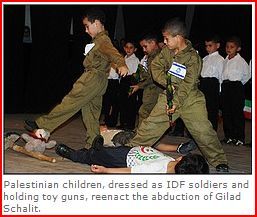 Jerusalem Post…Children in Hamas summer camps reenacted the abduction of IDF soldier Gilad Schalit in the presence of top Hamas officials, according to pictures obtained by The Jerusalem Post.

According to Israeli defense officials, more than 120,000 Palestinian children are spending the summer in Hamas-run camps. In addition to religious studies, the children undergo semi-military training with toy guns.

At a recent summer camp graduation ceremony, the children put on a show reenacting the June 2006 abduction of Schalit. Present was Osama Mazini, a senior Hamas political leader, who is in charge of the Schalit negotiations with Israel on behalf of the terrorist group.

In one picture, obtained by the Post, Mazini is seen standing next to Ahmad Bahar, the acting speaker of the Palestinian Legislative Council, distributing Korans to camp counselors.

“This sends a message,” one Israeli defense official said, regarding Mazini’s participation at the ceremony. “This is Hamas’s way of showing Palestinian children that kidnapping soldiers is the correct way of life.”

In contrast to the Hamas summer camps, the United Nations has been running summer games throughout the Gaza Strip for 240,000 children. These games, run by UNRWA, are being held at over 150 locations. The participants are mostly between the ages of six and 15 and engage in sports, arts and crafts, swimming and other cultural activities.

Last week, senior Hamas official Dr. Younes al-Istal told Al-Arabiya TV the UNRWA summer camps were part of a plan to corrupt the younger generation and prepare it for normalization with Israel.

Ahead of the summer, the Coordinator of Government Activities in the Territories allowed UNRWA to transfer truckloads of camp equipment – including inflatable swimming pools, toys, spray paint and musical instruments – into the Gaza Strip.