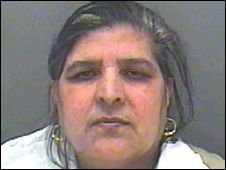 All this beauty is really guilty of is continuing  the ways taught in her fine Islamic home country. She should probably sue for religious discrimination.

A 63-year-old woman who imprisoned her three daughters-in-law, treating them as “slaves and dogs”, has been jailed for seven years.

Naseebah Bibi would not let the women – also her nieces – leave the family home in Blackburn, Lancashire, without permission, Preston Crown Court heard.

One victim told police she had been forced to work on an industrial sewing machine day and night for 13 years.

The women had arranged marriages to Bibi’s three sons, their first cousins.

But she was convicted at the court on 14 April.

All three women were brought to the UK following arranged marriages to Bibi’s three sons but were subjected to beatings and abuse from her after they arrived.

Judge Robert Brown, sentencing, said it was evident her victims had suffered physical and psychological trauma and had spent long periods “living in fear”.

He ordered that Bibi serve three-and-a-half years in prison before being allowed out on licence, but would then face further monitoring.

He said: “It seems to be necessary in the public interest that you should be subject to a long period of supervision after you are released from prison so that your situation and that in your household can be monitored.

“At the same time, because of your poor health and in particular your mental health, I shall keep the custodial element of sentence as short as I can, consistent with my duty to punish you, to deter you from further offences and to protect the public.”

Judge Brown said he would be contacting the immigration authorities about a fourth woman who had been betrothed to one of her sons.

The court heard how her daughters-in-law had high expectations of a happy family life in England when they married their first cousins in Pakistan.

But instead they were abused and allowed no contact with the outside world.

Bibi slapped the women across the face or hit them with a brush handle when they disobeyed her or answered back, the court heard.

Judge Brown said he had taken into account the “cultural element” of the case.

“I take into account that in arranging the marriages in the first place you felt obliged to follow the wishes of your own parents concerning arranged marriages,” he said.

“But none of these facts can be an excuse for the degree of cruelty and imprisonment to which the three victims were subjected.”

Lancashire Police praised the women for their “immense courage” in coming forward.

Sgt John Rigby, of the community cohesion unit, said: “The Asian community should be proud of these women for taking a stand, in some cases against their family’s wishes.

“We understand the complex cultural issues around victims coming forward but, as this case demonstrates, we are committed to investigating any reports of this nature thoroughly and will do everything within our powers to bring offenders before the courts.”