From Townhall.Com a worthy blog anytime. By Allen Hunt

Guantanamo is no threat; the prison in your own community is. Have I got your attention? 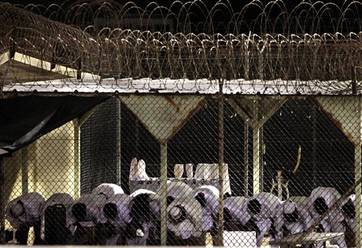 Four men were arrested this past week for allegedly plotting a terror attack on two Bronx synagogues and an Air National Guard flight. They possessed a car load of explosives and a Stinger missile they believed to be real (fortunately, it was not).

What do the four men have in common? More than you would ever guess.

Laguerre Payen, Onta Williams, David Williams, and James Cromitie all had violent pasts. All had recently served time in an American prison or jail. Most significantly, all four men exited their prison time as Muslims.

None appears to have been born Muslim; however, the time in an American prison resulted in their embracing the supposed religion of peace, Islam.

How can this be? Very simple. For decades, Islamic groups have strategically targeted American prison populations as a fertile field for growth and as a seedbed for homegrown terrorists. What we are seeing now is merely the fruit of that missionary effort by groups like the National Islamic Prison Foundation, formerly run by a top Al-Qaeda fund-raiser who himself is now behind bars, the Islamic Assembly of North America, and the Islamic Society of North America. Much of these groups’ funding comes from Saudi Arabian proponents of Wahhabism, the most violent segment within Islam. A little-noted editorial in Investors’ Business Daily clearly articulated this threat back in 2007. This week’s arrests made that warning all the more real.

These groups’ strategy is brilliant – find the most disenchanted American residents, who already speak English and understand American culture; attract them to Islam and its most violent expressions; and then turn them loose on their own homeland. In other words, target those Americans most likely to be anti-American and then give them the philosophy and tools to live out those hostile convictions.

Shortly after the events of September 11, in the Wall Street Journal, Charles Colson noted the danger when he wrote, “Two million people occupy America’s prisons and jails today–two-thirds of whom are nonwhite. Many feel oppressed by the white power structure and sentencing disparities, which too often fall most harshly on minorities.”

So what do you get when you have terrorist groups targeting the most angry, resentful, and angry members of American society? Homegrown terrorists like Jose Padilla, the four men suspected in the Bronx plot, not to mention prison convert Richard Reid in Great Britain. The chickens have come home to roost.

The danger in our own prisons far exceeds that of the terror detainees presently living a much-debated lifestyle in Guantanamo cells. American terror suspects, like those arrested this week, represent our own citizens whom we have intentionally chosen to expose to the worst element of international society by allowing radical Islamic groups access to our own prisons.

Much of the blame rests with our continuing to live in the make-believe world where Islam is considered compatible with Western ideals. As if freedom of speech, tolerance, and freedom of religion were values common in Islamic lands. Can anyone name one Muslim-governed land where a Christian would feel comfortable in expressing her faith with fullness? Or a Muslim nation where a homosexual man would feel safe in making his lifestyle choice? Islam continues to struggle internally to find a way to transition into the modern world. That solution must come from within Islam itself. In fact, it cannot come from anywhere else.

In living this politically correct fantasy, we have allowed those who desire to destroy us to recruit, train, and deploy their own anti-American army from within our own prison system. How sick is that? And we have done so in the name of tolerance. A politically correct tolerance that our own President foolishly believes can lead us to peace and harmony with the Islamic world.

The Federal Bureau of Prisons continues to mire in the issue of whether to remove extremist materials from prison libraries. Saudi donors and others continue to fund prison strategies for Islamic supremacists. And we continue to sit idly by as the seeds of our demise are sown within our own land and citizenry.

Remedies for the impending disaster of terror from within do exist. However, they require vision, courage, and clear-thinking rather than the political correctness that so permeates every level of American government and education today.

First, ban radical imams from having access to American prisons and jails. Prison officials have plenty of authority to make this decision.

Second, create a list of radical materials and books not allowed to be distributed in American prisons and jails. The list would be short but clear. The present politically correct thought has been to ban all religious materials entirely from prisons, a strategy that will remove hope and the possibility of positive life change from the prison population. The task is not hard; the courage required to speak the truth is.

Third, crack down on any foundations or groups providing funding for Islamic presence in prisons. Ensure that their finances are clean and that the materials used are not the most radical ones present within Islam.

Fourth, require a world religions course, created by a reputable, reasonable scholar, for every high school student before graduating. Most of what happens in the world is shaped by the faith lives of citizens and participants. Few Americans have any real education in the origins, history, and core beliefs of the world’s major religions. That knowledge simply is a must in a pluralistic culture and world. Otherwise, the Western ideals of freedom, dignity, and equality will soon be vanquished by our own ignorance of the world-views of those who abhor our values and seek to destroy them.

Finally, find proactive ways to express love in the Muslim world. The truth is undeniable. What is needed is not more violence or war. Nor is education the only solution. What will turn the tide in the end will be a change of heart on all fronts. Only selfless expressions of love can accomplish that end.

Ministries like Prison Fellowship have found ways to achieve positive life change in American prisons and have the demonstrated track record to prove it. As Americans, we simply must find the faith life and courage to extend love in tangible, specific ways to those who live in the Muslim world. Until then, we will continue to face an assault on our values from within as well as without. Worse, we will continue to release prisoners onto our own streets yearning not to assimilate into society but rather yearning to get even.