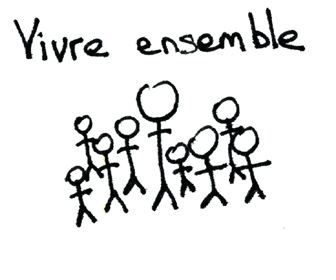 It has happened in England, Canada, and the United States. It was bound to happen in France. An innocent Frenchman was found decapitated in Lyons. This report is from Le Progres, via François Desouche:

A victim atrociously mutilated on the 12th floor. A suspect who lived on the 5th floor. The entire affair is concentrated on #5 of a large complex of residences, 65, rue de Saint-Cyr in Lyons. On Saturday afternoon (April 25), Raymond Arveuf, 62, was found decapitated (note: the head was missing) in his apartment on the top floor of the building by his brother who was concerned that he had not been present at the usual family dinner on Saturday. The night before he had been watching a soccer match with friends in a bar in Valse.

The police inquiry was quickly oriented to a lower floor. Traces of blood were followed, leading police to feel that the victim’s head had been thrown into the trash and carried off the next day by waste removal services. Moreover, the inter-regional judicial police ran into Youcef Djellouli, 29, a neighbor on the 5th floor, whose speech was confused. Taken into custody, this oldest member of a family of four children did not delay in admitting to the murder. The young man spoke, in substance, of a sudden desire to kill. According to his initial statements, it was indeed he who had been heard at 2:30 a.m., he who struck, slit the throat of and decapitated the bachelor who apparently had lived a quiet life. The presumed weapon, a kitchen knife, was found in his home. The reason for his actions were still not understood.

Several local residents described the young man as disturbed, thin, with a ungainly walk, and changeable behavior. A mental weakness had suddenly exploded, without anyone being certain if some quarrel with the victim had pulled him in this direction.

“A judicial investigation is to begin on Monday, and experts will examine the man’s personality to better understand,” confided a judicial source.

Two testimonies lent strong credibility to the suspicion that the murderer lived on the scene. A neighbor was awakened by the screams of the victim and heard the aggressor take the elevator. “I didn’t see anybody go out of the building, so I assumed he was still here,” he confided. (…) Another resident said he heard the entry door open violently, before the crime. Then a thud that could have been the broken mirror in the lobby of #5. The mirror in which the killer saw his own image during his murderous rage. He broke it with a bottle. Yesterday, a child’s drawing was pasted onto the cracks: a colorful butterfly that seemed to be trying to erase the somber events in the apartment complex.

There is a comment at Le Progres from someone who knew Raymond Arveuf (left). It appears he was near retirement, was very well-liked, very friendly, and completely innocent.

The sketch at the top refers to “Living Together”, the touchy-feely propaganda slogan aimed at convincing Frenchmen that they must learn to live with aliens, criminals, and invaders bent on conquering their territory – or else.