What exactly is Canada’s role in Afghanistan? When our military was first deployed it was done so provide security and support then to hunt Al Qaeda. Now it finds itself as the defenders of Afghan communities which is essentially a peacekeeping role and an offencive battle group. I cannot help but think a little more clarification would go a long way to keeping our brave soldiers safer. 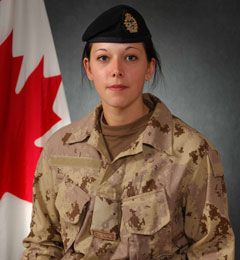 Kandahar, Afghanistan — On a day that was to be reserved for the pomp and ceremony of the Canadian battlegroup’s change of command here, soldiers are instead mourning the death of Canada’s 117th casualty in Afghanistan.

Trooper Karine Blais, 21, was only the second Canadian female soldier to die in combat. She lost her life around 5 p.m. Monday in the often mountainous district of Shah Wali Kowt, north of Kandahar city, when the vehicle she was riding in struck a deadly improvised explosive device.

“This young woman’s life did not go to waste,” said Brigadier-General Jonathan Vance in a statement released Tuesday morning in Kandahar. “Her life was lost in the pursuit of peace and stability,” he said.

Trooper Blais, from 12e Régiment Blindé du Canada based at Canadian Forces Base Valcartier, was serving with the 2nd Battalion, Royal 22e Régiment Battle Group – the famed francophone regiment nicknamed the Van Doos. She had only been on the ground in Kandahar for two weeks.

“She was an energetic soldier who gave 100 per cent to every challenge she faced, using a unique sense of humour, based on her honesty,” Brig.-Gen. Vance said. “Frank and direct, she demonstrated the qualities of a future leader who was respected by all members of her squadron,” he said.

Four of Trooper Blais’ comrades were also injured in the blast. They were ultimately airlifted to the medical facility at Kandahar air field following the incident, although fierce sand and rain storms delayed the helicopter Monday night.

This is the Quebec-based battlegroup’s first death on their six-month tour. Although it officially begins Tuesday, soldiers have been phased into their posts across Kandahar over the past couple of weeks.

“The days and months ahead will be extremely difficult for those who knew Karine, and we must stand together to support all of those for whom she had a profound effect,” said Brig.-Gen. Vance. “Her dedication to the overall mission is commendable.”

Trooper Blais leaves behind her mother Josée, her grandmother Laurette and one brother, Billy.