Thanks to Gates of Vienna:

Britons should ‘wake up before it is too late’ or suffer another 7/7 terror attack, hate cleric Omar Bakri has warned.

In a sinister rant, the warped preacher threatened that ordinary Muslims living here would rise up and retaliate for the ‘evil’ acts of British soldiers in Iraq and Afghanistan.

Bakri, banned from Britain four years ago, broadcast his twisted threats from his Lebanon bolthole over a speakerphone to a bizarre press conference in London arranged by his UK lieutenants to justify their vile protest in Luton last week against soldiers returning home from Iraq.

Defending the Muslim fanatics who held sick banners insulting the families of dead soldiers, Bakri, 50, taunted: ‘Why are you so fussy and upset to hear that those who return from Iraq as “heroes” are really murderers and killers? The moment you start arresting us because we are Muslim you are digging a big hole. 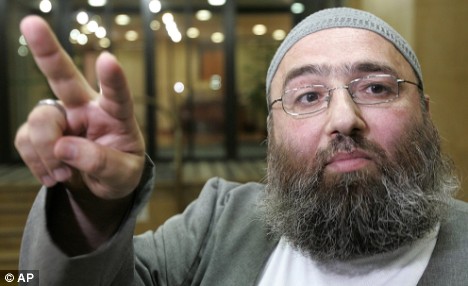 Wake-up call: Omar Bakri has warned of another 7/7-style attack

‘You want to declare war against us? We will declare Islam against you. It is time for you to wake up before it is too late. If you put pressure on Muslims and push them underground, people will come and rise and retaliate against you. The 7/7 bombers were just ordinary Muslims in the community. It shows how your evil policies have pushed them.’

Three of Bakri’s extremist disciples, who want to establish Sharia law in the UK, told the press conference at a hotel in East London they agreed with every word he said. They compared British soldiers fighting in Iraq to the suicide bombers who blew up 52 innocents on July 7, 2005.

Firebrand Anjem Choudary, a self-styled ‘judge of the Sharia Court of the UK’ said: ‘You only need to look at the wills of the 7/7 attackers to see why they did what they did. They did it for reasons we still see today, the vilification of Muslims.’ He condemned British soldiers but refused to condemn the 7/7 bombers, insisting: ‘You have to look at the root causes of their actions.’

Last week the Daily Mail exposed 42-year-old fundamentalist Choudary’s student days when he was pictured swigging beer, leering at pornographic images, cavorting with women and puffing on a cannabis joint – offences for which he would be lashed and stoned under his version of Sharia law. 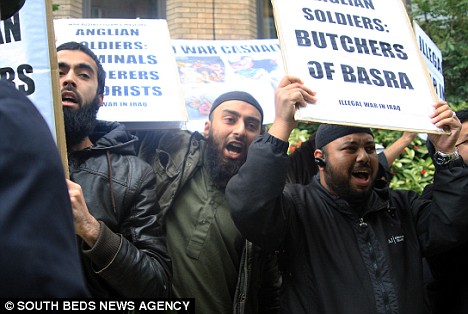 Contempt: Muslim protesters at the homecoming parade in Luton

He sheepishly confessed: ‘It is wrong to talk about your previous sins but I say, yes, I was not always practising Islam. Certainly in my student days I was not a practising Muslim. If you grow up in Britain, then most likely your instincts and desires will be exploited by the society in which you live.’

Sitting alongside him, Ishtiaq Alamgir, another ringleader of the shameful Luton protests, accused British soldiers of torture, rape and murder. He said: ‘Those British soldiers have blood on their hands. People say the soldiers were just doing their jobs, but the same could be said of the 7/7 attacks because they were following the orders of Sheikh Osama Bin Laden.’

The 29-year-old, who is unemployed and claiming benefits, demanded soldiers quit rather than allow themselves to be sent to Iraq and Afghanistan, adding: ‘They are taking part in an illegal war. We will continue regardless of how many people get upset or offended. The truth must prevail, we will keep calling for the truth until it is established or we are killed.’

A third firebrand, software programmer Abu Abdullah, 30, branded the British Government ‘tyrannical’ and warned: ‘Do not relax, do not recline, or you will be touched by the fire of hell.’

In an astonishing diatribe, Mr Choudary claimed Sharia law was the only way to fix Britain’s ills, and claimed people such as Business Secretary Lord Mandelson, who is gay, should be stoned to death for practising homosexuality.

He said of the peer: ‘If a man likes another man, it can happen, but if you go on to fulfil your desire, if it is proved, then there is a punishment to follow. You don’t stone to death unless there are four eyewitnesses. It is a very stringent procedure. There are some people who are attracted to donkeys but that does not mean it is right.’

Rejecting democracy and the rule of law in Britain, he said there was no point in standing for election to test his call for Sharia law with voters.

He said: ‘We can’t participate in the system of man-made law. It is not up to Parliament to decide what is lawful. There is no reason to discuss the laws because the laws have already been decided, by Allah.’

Mr Choudary complained he was regularly told he could ‘leave Britain’ if he did not like it here.

Friends of Mr Choudary from his days at Southampton University say they do not recognise the party-loving student they knew as ‘Andy’.

One former friend said: ‘I can’t keep a straight face when I see “fundamentalist Muslim Anjem Choudary” in the papers attacking the British for drinking or having girlfriends.
When I knew him, he liked to be called Andy, would often smoke cannabis spliffs all day, and was proud of his ability to down a pint of cider in a couple of seconds.’