CBCNEWS… The president of the Philippines imposed martial law Saturday on a southern province where 57 people were killed in a political massacre, while security forces detained members of a powerful clan accused of plotting the attack and fomenting a rebellion.

It was the first time martial rule has been declared in the country since the late dictator Ferdinand Marcos imposed it more than three decades ago. With memories of abuses from that time still fresh in their minds, opposition politicians and human-rights groups questioned President Gloria Macapagal Arroyo’s action, saying she overreacted to a police problem.

Government officials defended Arroyo, saying she acted decisively to bring suspects in the mass slayings into custody and head off a rebellion by the Ampatuan clan, which has ruled the impoverished Maguindanao province unopposed for years.

Clan patriarch Andal Ampatuan Sr. — a former governor who was among those detained Saturday — and at least six other family members are the main suspects in the Nov. 23 attack on a political rival’s convoy, in which about 30 journalists were killed. The family has denied involvement.

The Ampatuans, notorious for running a large private army, were allied with Arroyo and helped her receive crucial votes from the volatile southern region during 2004 elections. Arroyo’s ruling party expelled the clan after the massacre.

The last Philippine leader to declare martial law was Marcos, whose nationwide declaration in 1972 paved the way for his one-man rule that ended with his ouster in 1986.

Under the post-Marcos constitution, Arroyo can enforce martial law for 60 days, unless Congress revokes or extends it.

Fidel Ramos, the former president who was a supporter of Arroyo but has recently been critical of her actions, described her move as “overkill.”

In Saturday’s announcement, Ermita cited military reports as saying heavily armed supporters of the Ampatuans had “plans to undertake hostile action” if clan members were arrested.

“We felt that this is a very imminent threat, so we recommended this proclamation,” military chief of staff Gen. Victor Ibrado said. “By their sheer number, they are really a threat to the peace and order of the province.”

Justice Secretary Agnes Devanadera said the arrested men would be charged with rebellion, which carries a penalty of up to 40 years in prison.

“We evaluated very closely the facts and circumstances and information that were reported to us and there is no mistake in the analysis — it was a looming, and in fact it was already, practically an overthrow of government,” she said.

But CenterLaw, a group of human-rights lawyers, said there were insufficient grounds for martial law and would challenge it in the Supreme Court.

“The constitution limits the grounds to insurrection, rebellion and invasion. None of these grounds are existent,” it said in a statement. “We call on the citizenry to be vigilant for the defence of their civil liberties.”

For several days, hundreds of security forces have surrounded the sprawling Ampatuan compounds in Shariff Aguak, the provincial capital. END_OF_DOCUMENT_TOKEN_TO_BE_REPLACED 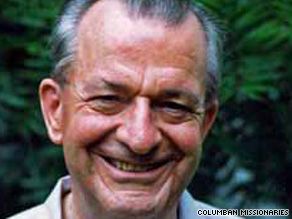 CNN) — An Irish priest was kidnapped Sunday in the southern Philippines, his missionary society said.

Father Michael Sinnott, part of the Missionary Society of St. Columban, was kidnapped at about 7:30 p.m. local time “from outside his home in Pagadian City, Province of Zamboanga del Sur, Mindanao, as he was taking an evening stroll in the garden,” the society said.

“Four or five armed men burst into the garden and bundled [Father] Michael into a pickup truck and drove to a local beach. The vehicle was abandoned and burnt. [Father] Michael was taken away in a speed boat.”