Politicians in the city of Stockholm decided today to cancel Alternative for Sweden’s (AfS) final election gathering in Kungsträdgården (“Kungsan”) this coming Friday, September 7. However, the AFS announces that they will still show up, and are calling on supporters to join them. 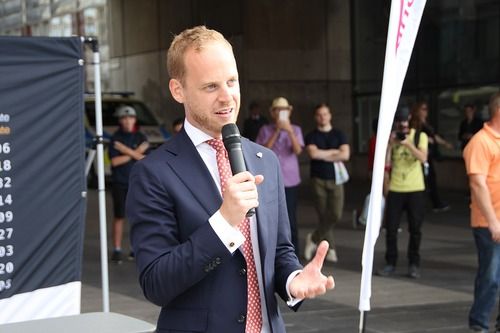 “We do not accept this decision,” says party leader Gustav Kasselstrand to the Swedish online outlet Fria Tider.

In connection with the public AfS party rally in Malmö this past Sunday, Jeff Ahl was reported for “persecution of minorities” because he used the phrase “Sweden for Swedes”.

This is what the city of Stockholm is using as an excuse to cancel the party’s final election rally in Kungsträdgården this coming Friday.

“Our premises and facilities should not be used by those who want to harm our democracy. This applies equally regardless of which anti-democratic or extreme political orientation you support,” says the Social Democratic Finance Council member Karin Wanngård.

In a press release, it was also stated that “We do not rent premises or facilities to organizations that do not support the democratic rule of law, do not stand up for human rights and do not support equality between women and men. ‘Persecution of minorities’ is a clear stand against the violation of human rights.

When Fria Tider called AfS party chairman Gustav Kasselstrand, he said that they will not obey Stockholm city council’s decision.

“It’s scandalous. We will not accept the decision. We invite everyone to come to Kungsan on Friday.”

He says that the charge against Jeff Ahl is “utter nonsense” and points out that it is the police themselves who have levied the charge. “You can, basically, be reported for anything these days under the heading ‘persecution of minorities’,” Kasselstrand says.

“We want a democratic meeting, and we have been granted permission for this under the rules of procedure. But apparently the city of Stockholm does not accept this, so it’s obvious that it is they who do not support democracy. It’s just an excuse they are using, as they are terrified of us having this public meeting.

“Make sure to come to Kungsträdgården,” he continues. Show your support for Alternative for Sweden and freedom of expression. We are now waging war against the political establishment,” he says to Fria Tider.

According to AfS Vice-Chairman William Hahne, the party has spent a lot of money on the planned election final. “We have spent hundreds of thousands of kroner and hundreds of hours preparing our big finale before the election, a finale that is now essentially being stopped by a trumped-up charge. Stand up for democracy and show up anyhow! EVERYBODY TO KUNGSAN!” He writes on Twitter.