[This post was started and forgotten amongst the chaos a few days ago. Its good to see it in that light, although I have added what new information I have]

On February 11th of this year, this site reported on a restaurant blowing up near the intersection of Hurontario and Dundas.

Three months later we have this:

Two restaurants blowing up on the same street in the same, vibrant diverse neighbourhood, and there is nothing that vibrates more than a good bomb blast, within a few months of each other, in a country where I might suspect there has never been an exploding restaurant in its entire history before that.

There are a few things we can tell about the restaurant that blew up this time however: 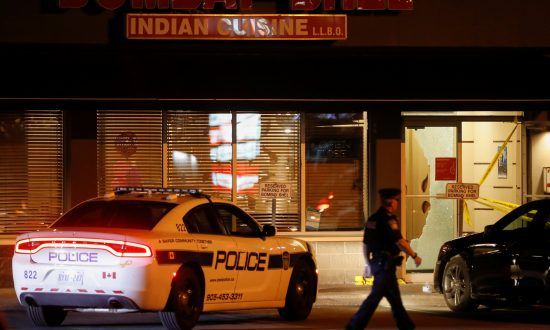 The LLBO sign, means its licensed to sell alcohol by the government of Ontario. This likely means that it was being run by someone other than a religious muslim. As ten years running this site has taught me, Islam is about imposing their rules on others, and less about personal observance. So this is a safe guess.

[In a personal conversation I had with a well known Canadian figure in the counter-jihad, counter-communist movement, I was informed in fact, that this restaurant, like its sister of the same name, is owned and operated by Sikhs.]

This video speculates that its an anti-Sikh terror attack by muslims. It doesn’t feel quite like that. Muslims generally go with the bombs like the guidance systems for ordnance they make themselves to be in these cases.

But it does feel like something geopolitical and along racial/religious/territorial lines.

We may never know as Canada probably is the most suppressive of real information concerning the effects of the Kenney-Trudeau/Soros-UN mass migration plan in the entire world.

Even the UK reports on the muslim Child-sex-slave gangs even though the way they describe them you would think it was some Kindly muslims with some candy, a comb and a hair dryer, as one example of this suppression.

There should be a lot more on this event. A decade or two ago, something like this would have been front page news and top of the CBC TV news for weeks if not months. But now  that we have gone Orwell, there is narrative driven deception, like the Quebec mosque shooting, and then its dropped and even surpassed. Like the trial of the Quebec mosque shooter.

We will post what we can, if and when we find something.

5 Replies to “A very curious road in Mississauga”