It is not an April Fool’s day joke: Jan Böhmermann’s taunting poem about the turkish president has been deleted from the media library, because it does not conform to ZDF quality standards. Böhmermann consented to the removal.

ZDF has deleted an entire segment, published last Thursday, from Jan Böhmermann’s “Neo Magazine Royale”. The satirist read a taunting poem about the turkish president Recep Tayyip Erdogan, and he had created an image which hit below the belt.
It all started in response to the German Ambassador’s summon in Ankara because of a satirical film by the show “Extra 3”

He explained the difference between permissible satire and prohibited vilifying critique. In order to demonstrate the difference, he read a satirical poem that disparaged Erdogan – not without continuously pointing out that this was not permissible.

As ZDF has confirmed the segment had already been aired on ZDFneo. “The parody on “Neo Magazine Royale” from March 31, about the proper handling of the turkish president with satire did not correspond with the standards that ZDF has set for satirical programs”, the station explained. “For this reason, that segment from the show was removed.”

ZDF station chief – “there are limits”

[Screen cap of one of the finer moments] 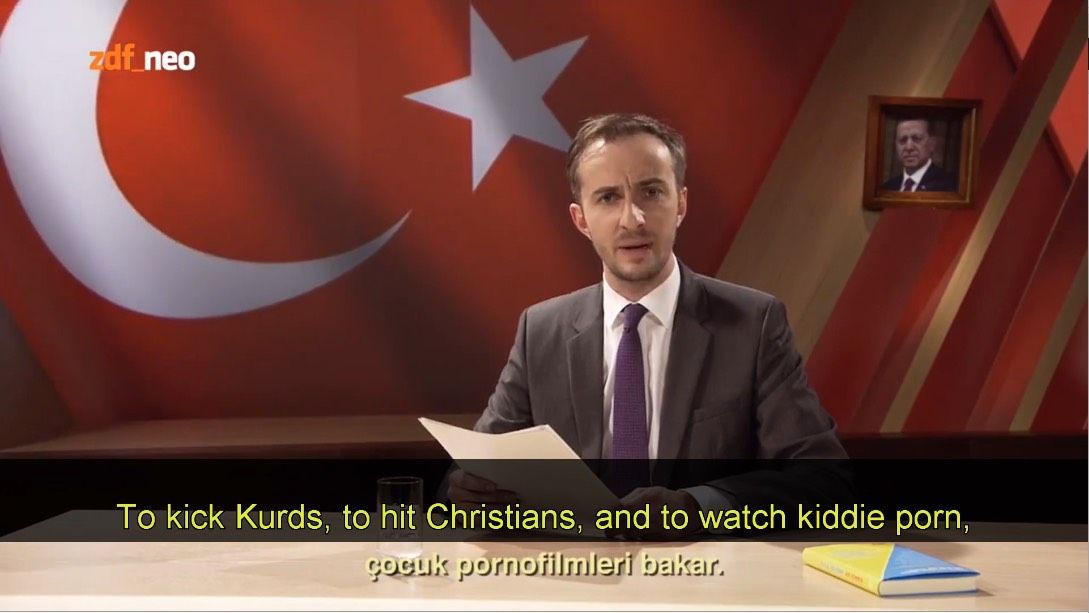 On their Twitter and Facebook page the “Neo Magazine”, many users thought it was an April Fool’s day joke when news hit of the deletion. ZDF denied it was a joke when “Welt” asked.

According to information by SPIEGEL, program director Norbert Himmler have the okay for the deletion while on vacation. He defended the act: “We are known for having broad shoulders for satire and that we give the individual protagonists a lot of wiggle room”, Himmler told SPIEGEL. “But there are limits to irony and satire. In this case the limit had been clearly overstepped. That’s why, in agreement with Böhmermann, we decided to remove that particular passage from the show. This pertains to the segment video in our media library, clips on youtube, as well as re-broadcastings.”

Himmler also said that Böhmermann had consented to the deletion, and his manager did not comment on the incident and referred to a corresponding explanation of the station in Mainz. Böhmermann himself spoke out on the Facebook page: “ I think that today on April 1, 2016, we have, together with the ZDF, impressively shown where the limits of satire stand here with us in Germany. Finally! If, in my obligatory fee financed fulfillment of my pedagogic assignment, I should have violated the feelings of a flawless, unblemished Democracy, then I sincerely plead for forgiveness”, the host wrote on his page.

Originally the show was to be re-broadcast on Friday night at 0.00. But because of the death of the former exterior minister Hans-Dietrich Genscher, the program was changed. “Neo Magazine Royale” was put off to the 1.15 AM spot – and will be shown without the segment about the turkish president.

On Friday, BILD cited from the comparatively harmless first verse of the poem: “Incredibly dumb, cowardly and repressed – that’s Erdogan, the president.” Afterwards Böhmermann and his assistant Ralf Kabelka gave out some handy tips on how to proceed against such vilifying critique in order to get the critique removed from the media library. They recommended to contact “our joke lawyer Dr. Joke in Berlin”. 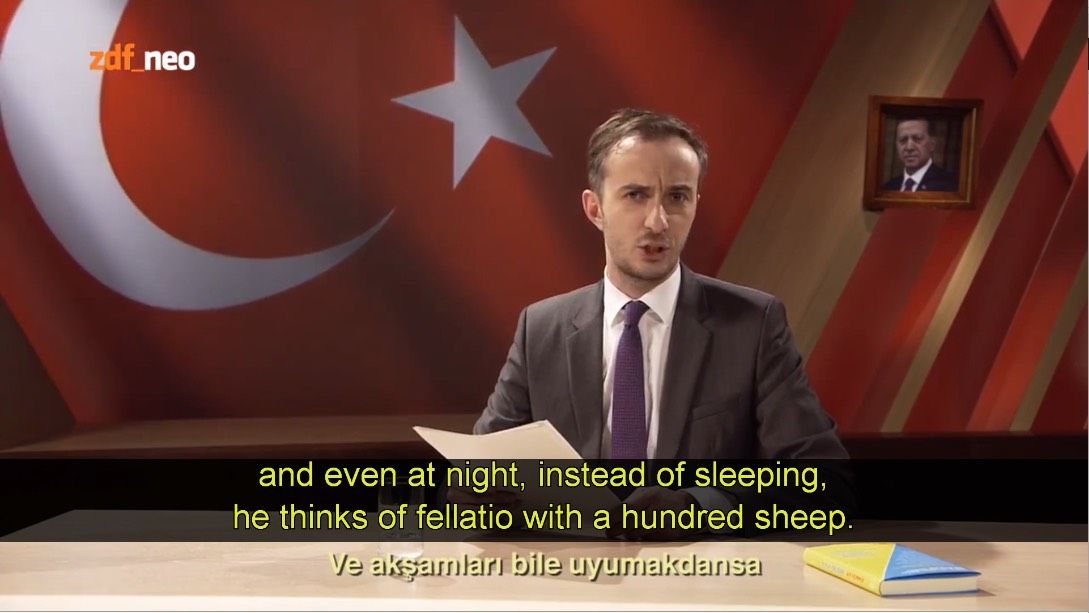