Mr President, Members of the Court, 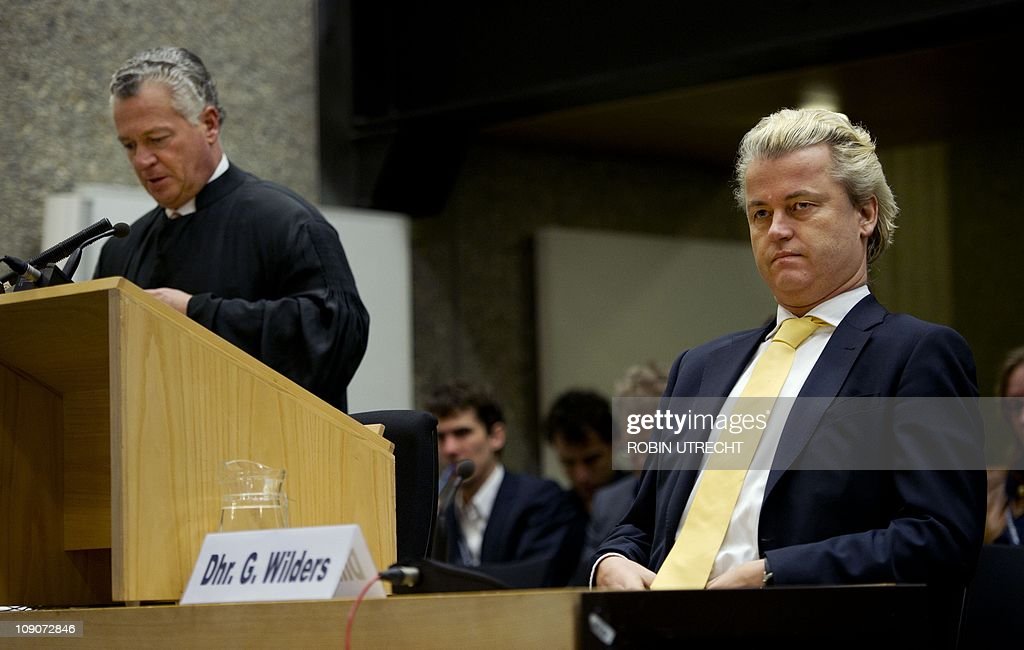 For more than eleven years, I have been living under death threats. Every day, I am reminded of this. Even today. This morning, I was driven here in a convoy of armored cars, with sirens, flashing lights, and surrounded by bodyguards. And not only today, but every day.

I will be brought home in the same way. Home is a safe-house. My office is a shielded room. And when I have to stand in court, it is here, in a bunker at Schiphol.

For more than eleven years already, I have been paying a heavy price. And I think that you as well as I know why. I am paying that price for the same reason as why I am standing in the dock for the second time. Because I dare to criticize Islam and mention the Moroccan problem.

“Freedom is the power that we have over ourselves,” said the great Dutch jurist Hugo Grotius. His statue stands at the entrance of the Supreme Court in The Hague. Hugo Grotius is the symbol of Dutch law. But once he was on trial himself. He was sentenced to life because he had fought on the side of Johan van Oldenbarnevelt for Dutch freedoms. But Grotius escaped in a coffin and fled to Antwerp.

So here I stand again.

And I honestly think it is a disgrace that I have to stand here.

Millions of people in this country and abroad think so, too.

I do not ask for your compassion. But now that I am forced to stand here, I ask of you that you give me what I am entitled to: a fair trial. I ask that Lady Justice be blindfolded.

And I fear this will not be the case.

As my lawyer explained, over half of the legal complaints lodged against me proved to be false when they were investigated. People thought they were voting in elections, instead of pressing charges. Or they did not know my name. Or they were illiterate or did not recognize their signature. Or they said they did not feel discriminated against, even though it said so in their complaint. I hope that you will never be accused of something that you did not do. Or they got assistance from mosques or Labor politicians. Or they were told by the police that the officers also felt uncomfortable with Wilders’ statements. Or they were told by the mosque administration that they had to fill out the forms the police was going to bring.

Mr President, Members of the Court, this is nothing but deception, manipulation, intimidation, ignorance, it is a scam. It is incredibly shocking.

And that the prosecutor just said that this nothing to worry about is a disgrace.

Because in front of you stands a politician.

And he is being prosecuted because he has voiced a political opinion.

Why did I speak about fewer Moroccans?

The honest answer is because I want fewer Moroccans in the Netherlands.

The Netherlands has a huge Moroccan problem. It is my job as a democratically elected representative of the people to honestly identify the problems in our country.

How and why do I want to get fewer Moroccans in our country has already been written down in the PVV election platform since 2006: We want to stop immigration from non-Western immigrants, and therefore also of Moroccans, to promote voluntary repatriation, and to denaturalize criminals with a dual nationality and expel them from the Netherlands. And before, during and after the contested election night, I have repeatedly explained this in front of many cameras and microphones.

I did not say “All Moroccans must leave the country” or “Moroccans are no good,” but I advocated “fewer Moroccans”. Because that is my opinion, that is what I want, and what many millions of Dutch want together with me.

The Public prosecutor is trying to catch me, but he is selectively shopping.

If I would have advocated fewer Syrians, then I would not be standing here today. Or I would not stand here alone, but together with Prime Minister Rutte and almost all the government leaders in Europe. Because today they all want to get fewer Syrians.

The Public Prosecution is also applying double standards. And there are many examples of this.

How quiet was it when, earlier, politicians from the Labor Party spoke about Moroccan cunts (Mr Oudkerk), about humiliating Moroccans (Mr Spekman) and about Moroccan boys who have an ethnic monopoly on nuisance (Mr. Samson). Why were they not being prosecuted?

And how quiet was it when a Turkish member of the Dutch Parliament (Mr Öztürk) compared me with a tumor and said “One has to fight him,” and likened me to Hitler. Where were the mayors then who spoke shame of it and led processions of people going to press charges?

Where was the Public Officer’s press spokesperson when a Labor Party chairman (Mr Den Hertog) said that he hopes that I die of a heart attack, but that if a bullot is needed then it would have to big enough to engrave from the grateful people on it?

Where was the outrage of the Prime Minister when a D66 member (Mr Mohammed) said he would put a bullet through my head and cut me open and feed me to the pigs?

And why was there no prosecution of the former police commissioner of Amsterdam, Mr Van Riessen, who said about me, and I quote: “Basically one would feel inclined to say: let’s kill him, just get rid of him now and he will never surface again.” End of quote.

Where were the preprinted declaration forms then?

What a duplicity. What a selective indignation.

And when someone is taken to court, such as the Moroccan rapper who said that he, and I quote, “hates these fucking Jews even more than the Nazis”, end of quote, then he is acquitted, because then suddenly his words are covered by freedom of speech.

These double standards and this hypocrisy by both politicians and the Public Prosecutor turn this trial into a political trial. The leader of the largest opposition party, who proves too strong to defeat in Parliament, must be neutralized. That is a disgrace and I hope you will not allow yourselves to be taken advantage of.

Because the problems of which I speak will not go away by keeping silent about them.

Silence is not an option.

If I, as the political leader of my party, during an election gathering of my party, am not allowed to say what has been written down in my party platform for a decade, then this is absolute madness and then one has to convict me.

My opinions will not change. And one will not be able to silence me.

I have been deprived of my freedom for over eleven years and the only freedom I still have is my freedom of speech. Nobody will be able to rob me of it.

On August 24 last year, in the television program ‘Looking into the Soul’, I heard one of your fellow penal judges, Mr Hermans, say that voting for the PVV is – I quote – a “huge contra-indication to the profession of judge.” Excuse me that this worries me.

And I am even more worried because, of all people, it happened to be one of you three, Mrs Van Rens, who on August 17 last year in the television program ‘Looking into the Soul’ criticized political views of my party, which is allowed of course. She said that she opposes minimum sentences and expelling illegal immigrants. But she said even more. Mrs Van Rens also criticized the judicial decision during my previous trial to approve our objection to the court. She said she did not understand that the objection was assigned by fellow judges because, and I quote: “there was no proper basis in penal law to allocate the objection.”

Mr President, Members of the Court, there has been only one single judge in the Netherlands who has openly criticized the judicial decision in favor of me. Only one. And she is exactly the judge opposite me in court today.

Madam Judge, I hope you understand that I am saying this and that I do not find this very reassuring. It would do you credit if you would withdraw from this case and I strongly call on you to do so.

Mr President, Members of the Court.

I meant what I have said, I spoke on behalf of millions of Dutch, I retract nothing and have no regrets. I have said what I think and I will continue to do so. Always.

But I hate no one, I do not incite any hatred and I abhor everything that has to do with discrimination.

That is the truth. Only in a dictatorship, speaking the truth is a crime.

And only in a dictatorship, the opinion of millions of people is criminalized.

I stand here before three judges, but actually it should be the 17 million Dutch who should judge my political expressions.

So I ask you: Let freedom of expression prevail.

Thank you very much.