An important article at Gates of Vienna by Paul Weston

The latest arrest of Tommy Robinson is a clear move by the British establishment to put him out of action during the PEGIDA walk in Birmingham on February 6. Our English correspondent Paul Weston, who is now one of the leaders of PEGIDA UK, has some choice words for British leaders and a message for the British people. 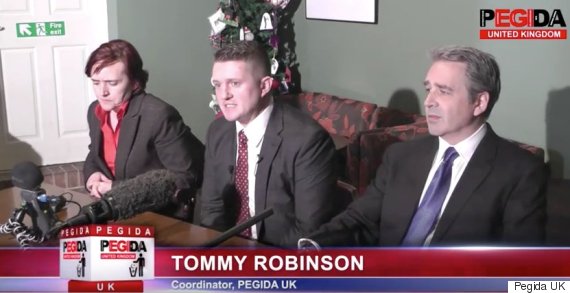 The news that Tommy Robinson was arrested Wednesday should send tremors down the spines of every British citizen who believes in justice and democracy. Tommy is no longer just a vocal opponent of the British state who engages in democratic argument, he is now a political dissident who can be persecuted at apparent will by the long arm of the newly totalitarian British government.

Is this an exaggeration? Is it really possible that gentle England — home of Magna Carta, John Locke, Thomas Hobbes, John Stuart Mill and Winston Churchill; Common Law, John Mortimer’s “Rumpole of the Bailey” who was a liberal barrister constantly invoking the Golden Thread or as it is better known, The Presumption of Innocence — has now morphed into a jack-booted socialist dictatorship where the British quasi-Stasi can throw political dissidents into a Gulag whilst the leftist media bat nary an eyelash?