1. London gets 600 armed police boost, not only UK city under terror threat – expert

(So the plan is, to bring in literally millions of the exact people borders were invented to keep out, and then when they act exactly as everyone on Earth knew they would, even and maybe especially the people who denied they would act this way, and now we must turn our own nations into police states where there is no distinction between military and civil forces and laws are applied on a group by group basis. Rise up England. Its now or never. If you take comfort in the idea that there are thousands more police armed with Automatic weapons on the street it means you didn’t take civics or you know why they stopped teaching it)

Metropolitan Police officials have announced 600 more firearms officer posts for the British capital in response to November’s terror attacks on Paris, but experts warn London isn’t the only UK city at risk of terrorism.

Met Commissioner Sir Bernard Hogan-Howe, head of London’s police force, said the attacks on the French capital “reinforced the vital role that firearms officers would be called upon to play on behalf of all of us, to run forward and confront the deadly threat that such attackers would pose.”

One hundred and thirty people were killed and hundreds more wounded as gunmen and suicide bombers hit targets across Paris in the shocking 2015 attacks.

2. 5 Critical Takeaways from the Islamic ‘Radicalization Report’ the NYPD Is Deleting From Its Website

New York City has caved to the demands of Muslim groups in connection with its intelligence and surveillance activities of the Islamic community. In a politically correct move, the city is resorting to self-censorship over safety.

As part of its settlement with plaintiffs in the cases of Raza v. City of New York and Handschu v. Special Services Division — coincidentally, the settlement was released within hours of the shooting of Philadelphia police officer Jesse Hartnett by a self-identified American jihadist — the NYPD will be removing Radicalization in the West, the groundbreaking 2007 report on the “homegrown” jihadist threat, from its website.

3. An interesting mix of islamic and Marxist thought from this muslim in Sweden

4. Bavarian governor packs 31 migrants onto a coach and sends them on seven-hour journey to Angela Merkel’s office in Berlin after warning the German leader: ‘We can’t manage’ 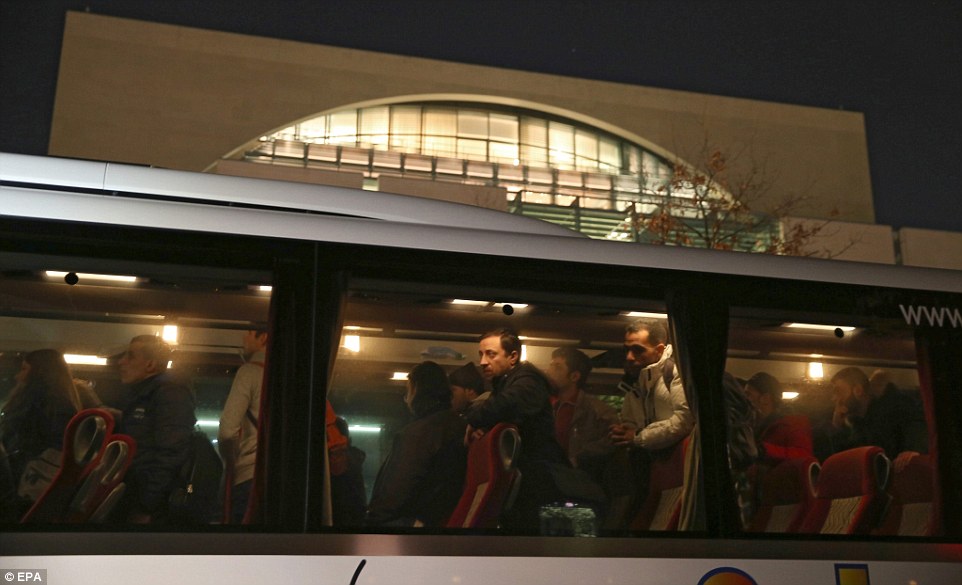 (I’m tempted to do a fund-raiser for him so he can take as many like minded friends, ideally from Hollywood, with him)

An Oregon folk singer plans to leave next week to serenade the Islamic State, and he intends to bring the black-clad barbarians a prayerful message of peace — despite a warning from the State Department that his life could be in danger.

James Twyman, of Portland, Ore., told FoxNews.com he feels a “calling” and believes he can soften the hearts of the Islamist army known for beheading Westerners, throwing gays off of buildings and summarily executing innocent women and children.

6. Clare Lopez on the Hillary Clinton, Benghazi untruths: Video 2 of 3

(Perhaps if police bothered to tell the public more about the attempted mass casualty terrorist attack at an Alberta nightclub a few days ago, people would take this sort of thing more seriously)

Vancouver police are asking the public not to jump to conclusions about a trio of men who were filming inside Pacific Centre mall Tuesday evening.

Palmer says they were seen taking photographs of the entrances and exits. He stressed that there is no information to suggest that these men have committed a crime or that the public is at risk.

The incident gained attention after it was posted online Thursday by a local blogger from a leaked internal Vancouver police memo, according to police. The VPD had no plans to release that information, said Palmer.

“It’s a pretty serious thing if we are going to be releasing photographs to the public, when someone’s job could be affected, when their neighbours may think they are up to something they are not, when people jump to conclusions when in fact there may be perfectly reasonable explanations for what these people were up to,” said Palmer.

Police and victims have furiously demanded to know why organisers did not warn them that refugees had committed abhorrent sexual harassment amid speculation such information could have helped avert the sickening attacks on New Year’s Eve.

Young women had to flee the welcome event in terror after being groped by gangs of migrant men, even though organisers repeatedly interrupted the music with messages in Arabic urging them to stop their harassment.

The revelations have raised the ugly prospect that some of those refugees were free to go on and commit the twisted sex crimes on New Year’s Eve because politically correct council officials did not report them to the police.

Thank you Wrath of Khan, PePi, Nash Montana, ML., M., and many more to whom I apologize to have lost track of. As I had some ‘meat-space’ issues to deal with the past day or so, I have lost the flow. More to come though. Meanwhile, for those wishing to stay ahead of the curve, read the daily links post comments. They are often days to weeks ahead of the crumbs the MSM offers when they feel they have to.

There is a great deal to come. Will work hard to catch up.

2 Replies to “Police states created, but most laws will only apply to the unbelievers, Canadians looking for ‘mid-eastern men’ for pre-op surveillance: Links 1 Jan 15 – 2016”