There has been seemingly endless news coverage,  in this is a very sleepy part of the world where a stolen bicycle still makes the news, so what’s happened? obviously 3 dead and 2 injured RCMP officers, and a lunatic running around with 2 high powered rifles, That all said we have seen some fairly militant action around the at the end of last year, and a fairly active ‘Palestine Solidarity’ movement both at large and connected to the local universities.

When this all kicked off, a friend first emailed me this rather graphic witness video and  the shooters Facebook page I quickly noticed that he was only a member of one FB page, which he had also “Favorited”. 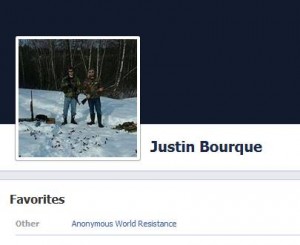 “Anonymous World Resistance”, one of many Anonymous FaceBook groups, with about 1000 members, notably with videos of police all over the world committing violent acts (with no context or location), support for the ‘palastinian cause’ and the expected anti-Semitic memes, one of which Justin had shared on his wall. So while the press have been happy to show Justin the hunter with a surprising hatred for the police, I have not seen one reference of his connection to Anonymous, which he clearly had, the page quickly drew a lot of praise for the cop killer, a local disgusted hacker “doxed” the page members and some of its content, due to the admins of the page clearly unwilling to distance themselves. Once they saw the dox, they deleted the FaceBook page themselves. If you read through the members list, you will see many who are local, and that local organisations and even the local Uni, UNB have liked it. 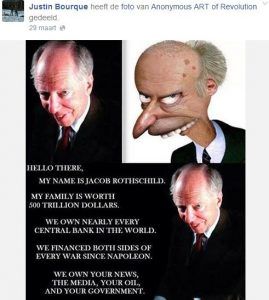 I have just heard thankfully that the madman has been caught from a friend who is in the locked down zone, it’s not public yet, lets hope its true. And lets also hope that Anonymous, the self proclaimed protectors of the 99% are held to account for this tragedy, the same as an imam sending a student on a suicide ‘martyrdom’ mission.

7 Replies to “Madman in Moncton”