This just in from Point De Bascule.

I don’t ask this often so please consider this request.

Read this article carefully over at Point De Bascule, and forward it or a summary of it, to everyone you can think of, especially in media or who has an interested blog. This is a chance for us to actually strike back against organizations who have been taking a generous amount of Canadian tax-dollars under false pretenses and who are affiliated with the sharp end of the Islamic spear. 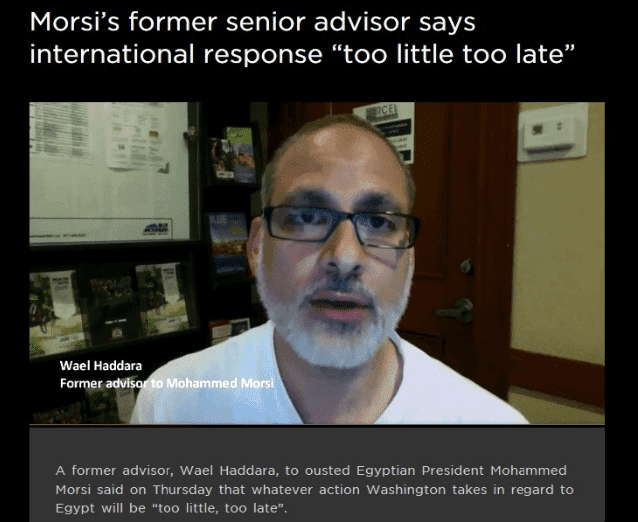 On his Twitter account, Wael Haddara introduces himself as an “ICU physician (and other things).” In recent months, one of these “other things” done by Haddara has been advising ousted Muslim Brotherhood-backed Egyptian President Mohammed Morsi. In an interview to Canadian network Global TV on August 15, 2013, Wael Haddara was introduced as a “former advisor to Mohammed Morsi.” According to his own professional profile, Haddara was born in Egypt.

…his position as president of the Muslim Association of Canada (MAC) on December 12, 2012. Besides his involvement with MAC, Wael Haddara has also been associated with the following Islamist organizations in the past: Muslim World League, CAIR-CAN, London Moslem Mosque, IRFAN-Canada and the Muslim Students Association (National). Appropriate references about Haddara’s leadership roles with these organizations are available in our previous article announcing Haddara’s resignation from MAC’s Board. This may not be a complete list of Islamist organizations with which Haddara has been involved in North America.

Please click over to PDB for the whole article. One has to wonder about Canadian Government funding to an organization with these kinds of ties.