Women stood shoulder to shoulder with men in Tahrir Square in 2011. Now they are back on the streets, opposing a new constitution that sweeps away their rights and opens the way for girls of 13 to be married. And in Cairo’s slums, life grows harder as the gulf between the sexes widens 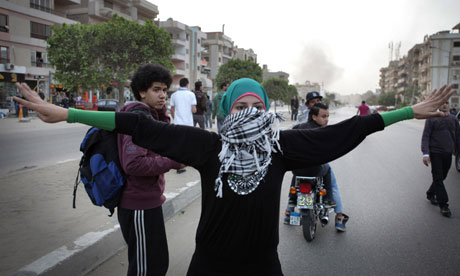 A woman marches on the Muslim Brotherhood’s HQ in Cairo to protest at plans to reduce the legal age of marriage to 13. Photograph: Gary Calton for the Observer

The ambush came from the left, from a side street which led up the hill to Mokattam mosque. A rush of hundreds of men running down on the march of anti-government protesters, bringing a sudden clatter of rocks landing all around, the crack of shots fired and the whizz of tear gas canisters. Sticks, stones and metal bars flew through the smoke in both directions and screaming women and men ran back the way they came.

Dozens of manned police vans remained parked a kilometre away. The only sirens came from ambulances that drove through the crowds and past burning vehicles to take some 40 injured people to hospital.

One angry woman with a bleeding mouth and eyes streaming from the tear gas pulled off her headscarf and stood yelling at the other side, the supporters of the ruling Muslim Brotherhood: “You are not Islam! You are not Egypt! Where is my freedom?”